Are The Super Eagles Coming Home Today Or Not??

The Nigerian Super Eagles are currently second on the Group D table with 3 Points followed by Argentina and Iceland with one point each and Croatia leading the group with 6 six points to themselves only.

However,  the Super eagles match with Argentina which is fixed for today will determine alot of things such as the fate of Nigeria in Russia , whether Argentina will proceed to the round of 16 or whether the Icelanders still have a chance at the World Cup.

It should be recalled that The Super Eagles at last week defeated the Icelanders to a 2-0 victory over them. This which had made more Nigerians  confident that the Super Eagles can as well defeat the Argentinian whom they have had history of losses to.

However, this bone of contention will be resolved today as the Advancing teams will be known. It should be noted that Nigeria and Senegal are the remaining African countries that has the chance of progressing to the Round Of 16.

In preparation for the final group match for the Argentinian and Nigerian teams which is slated for 7:00pm Tuesday , the Super eagles are seen training in their camp . 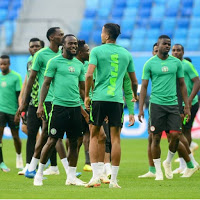 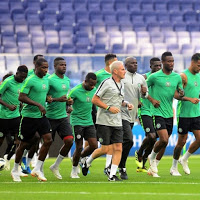 In a similar light,  report has it that the Super Eagles head coach, Gernot Rohr has plans of dropping the team wing player Victor Moses on allegations that he has not been playing up to his full potentials. And many reactions has followed whether this plan would favour the team of not.