Every profession has its own hazards, the ultimate being death. The oldest profession in the world, prostitution, is not an exception. But when death comes in a gory and gruesome way, it brings sympathy and condemnation especially when perpetrated by persons who ordinarily should preach against killing as a big offense before God 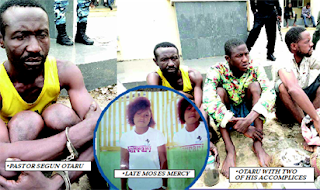 . Commercial sex workers may not attract sympathy when they run into trouble with their clients, but the manner Moses Mercy, an alleged prostitute based in Ozuri, Kogi State, was said to have been raped by a pastor and three of his church members to death and her body parts suspected to have been used for money ritual is pathetic.

The pastor and suspected accomplices were alleged to have raped the victim to death, removed her hands, legs as well as the head and buried her body in the church. Two of the suspects, Mike Stephen and Abdulmumuni Yakubu, after allegedly killing Mercy, had sex again with the dead body before cutting the hands, legs and head which they roasted, mixed with a lotion for Otaru to drink and rub on his body in order to get rich.

Kogi State Police Public Relations Officer, ASP William Aya, confirmed the story, saying the pastor, through a hotel attendant (name withheld) in Ozuri, had lured the alleged sex workers, an indigene of Benue State, from a hotel to his house where they carried out the act. Three days after, and Mercy had yet to return to the hotel, the attendant became apprehensive and called them, only to be frustrated by their response.

. Reports gathered that the victim hardly engaged in ‘home service’ but a decline in patronage for a longer time following the adverse economic situation in the country changed her position. She honoured the invitation only to meet her untimely death.

The pastor and suspected accomplices confessed to the crime which they blamed on poverty. Otaru told Sunday Vanguard that they got tired of their low life and decided to help themselves to the ritual suggestion brought by one of them who said he learned it while staying in Abeokuta, Ogun State.

On the idea of having sex with Mercy’s body, Yakubu, who said they believed sleeping with a dead lady will save them from vehicular accident, said the sex act felt the same with a live woman. The police said they had launched a manhunt for the fourth suspect, Mike Stephen.

According to the 45-year-old, he exhumed corpses from a cemetery in the two failed attempts and cut the needed parts for the ritual but money did not come. He said he expected to make at least N2.5 million from the latest attempt which led to the murder of Mercy. The principal suspect explained that he connived with the three suspects, who he described as members of his church, to commit the crime.

Otaru said it was the quest to get rich quick that made him to venture into money ritual as he could not wait for God’s time to be rich. The pastor, however, said he knew that what he did was against the preaching in christianity and the Word of God and he would not enter the Kingdom of God.

The disappearance of Mercy from the hotel where she used to ply her trade, for more than three days, had raised the suspicion of a hotel attendant. Two of the suspects, Oluwasegun Samuel and Abdulmumini Yakubu, had gone to the hotel in Adavi to pick the deceased and took her away. Unfortunately for the suspects, they left their telephone numbers with the hotel attendant through which they were contacted when the lady did not return.

The PPRO said the two suspects were first arrested and that, after interrogation by the homicide detectives of the State Criminal Investigation Department (CID), confessed to the gory details of how they were allegedly hired by the principal suspect (pastor) to get a lady for money ritual with a promise to pay them N700, 000.

The arrested suspects thereafter led the police to Uhodo, also in Adavi council area, where the remains of Mercy were buried in a shallow grave and it was discovered that vital organs and head of the victim had been removed.

I exposed our gang because I was cheated Robbery/kidnap suspect Also arrested by the Kogi police were suspected robbers and kidnappers, Ubile Attah, Julius Alhassan, Akuh Audu, Shehu Haliru, Onuche James, Amidu Yakubu and Abdul Tijani, who allegedly killed an inspector of police, simply identified as Mohammed in the state, last November.

The suspects were said to have been arrested in the eastern flank of the state with the AK 47 rifle of the deceased police officer. One of the suspects, Atah, who claimed to be 15, said he leaked the secret of the gang because he was short-changed in the sharing of the proceeds of their alleged criminal activities.

According to him, after attacking Ejule police post and killed the police officer, the gang also killed three members of the local vigilante and a civilian. He said they had been using the police inspector’s gun for robbery and kidnapping operations in Igala land.

The suspect, however, said he decided to spill the beans following the refusal of the other members of the gang that were older than him to give him his own share of the money they collected from their victims. According to him, he had complained several times about the action of his colleagues but when they continued to cheat him he had no option than to expose them.

The Kogi police spokesperson confirmed that the suspects were arrested with the AK47 rifle of the slain officer. He alleged that the suspects had been terrorising the people of Ejule, Ugwolawo and environment, adding that they were apprehended by men of the IGP Special Tactical Squad (STS).