"Killings Must Stop In NIgeria" - US Ambassador To NIgeria


United States Ambassador in Nigeria, Mr W. Stuart Symington has enjoined both the Nigerian leaders and citizens to make concerted efforts to stop the killings currently ravaging the country. The ambassador was speaking at ceremonies marking the 242 years of Independence for the United States of America.

Symington speaking on the situation in Nigeria said every day, people’s hopes are stopped by unnecessary deaths and by those whose acts reflect no good and served no cause.
He added that it was in the power of both leaders and citizens to stop the killings. 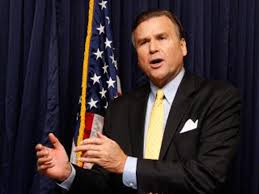 He eulogised Nigeria as a country of ‘world cup importance’ and that there is no country where more is at stake for the future of the world than Nigeria, noting that every day, “we work with good people to save lives and bend upwards the curve of economic growth, so that real opportunity and hope will outpace need. “

“But, far too often, we see the deaths of innocents whose hopes are stopped forever, by those whose awful acts reflect no good and serve no cause. These innocents must not be forgotten, Symington said, adding: “Nigeria’s leaders and citizens have it in their power to make this killing stop now, if you are united across all regions, all occupations, and all faiths.

When you act together with sincerity and high purpose and sustained effort, you will end this violence. This is not a goal, this is the Cup itself. And it will mean the World for you to lift it high!
The US ambassador emphasized that an enduring security “depends on strong citizens who support each other and their governments. It is as much a product of trust forged by opportunities shared and rules fairly enforced on level playing fields as it is the product of force wisely applied to answer threats.”

He also called for efforts to encourage mentors who can help Nigeria’s youths reach their goals, explaining that


.”If ten million Nigerians mentor just a few people each, that will change the course of all those lives, this Nation, and our world.” He added that the effort would start with calling on diplomatic colleagues to join in reaching out to ten people each.

“We will also reach out to those in our 170,000 person YALI (Young African Leaders Initiative) network, on our on-line mentoring site. I ask… that every one of those in the YALI network of Nigeria become a mentor themselves; that you reach out to “pay it forward” and mentor other Nigerians as you have been mentored…that would spur an extraordinary burst of hope and opportunity,” he concluded.