SAD: Man Drowns Out Of Fear For Police Arrest

on June 11, 2018
A man identified simply as Oge drowned in the Elechi River in the Diobu area of Port Harcourt, the Rivers State capital, while attempting to evade police arrest. Punch reports that the victim was relaxing with his friends when the police stormed their area and began shooting sporadically, forcing everyone to run in different direction. 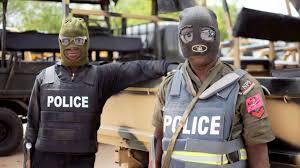 Oge ran into the river in the area to escape from the police but unfortunately downed because he couldn't swim.

An eyewitness, who identified himself as Kelvin, said Oge jumped into the river out of fear of arrest and immediately drowned and police officers were watching him as he was struggling in the river.

“Oge was playing with his friends when the police arrived and started shooting. Everybody ran in different directions and he (Oge) jumped into the river. After jumping into the water, he struggled for about 20 minutes but nobody helped him. The police only watched and never tried to save him and we (residents) could not save him because the police were around.” Kelvin said
Another eyewitness, Michael, said “Oge was not a bad boy, he was relieving himself when the policemen came. He ran out of the toilet in panic. Unfortunately, he jumped into the river and drowned because he could not swim and we are all sad about it''.

The youths in the area protested Oge's death by taking his corpse to the Diobu Police Division and later to the Braithwaite Memorial Specialist Hospital, where doctors confirmed him dead.

Commenting on the unfortunate incident, the state Police Public Relations Officer PRO, Nnamdi Omoni, said that the policemen were after suspected armed robbers and never shot at anybody.

“Policemen were there to arrest some suspected armed robbers and the man suddenly jumped into the river and drowned. If you look at the body of the man, you will not see any gunshot injury in his body. That he jumped into the river when the police were not chasing him leaves much to be desired.” he said
News