A 30-year-old father of five, Nura Aliyu, has landed in police net in Katsina for allegedly trafficking in drugs suspected to be codeine syrup.
Police said Aliyu was picked up on Tuesday evening along Senator Abba Ali road by Mohammed Dikko Stadium in Katsina. 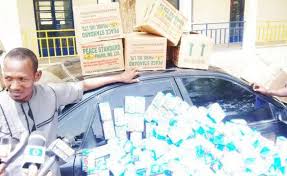 He was said to be driving a faded blue Honda Civic car with Kaduna Registration Number, AQ 475 DKA, loaded with 300 cartons of the drug when he was arrested.
The spokesman for the Katsina Police Command, DSP Gambo Isah, who confirmed the arrest, put the monetary value of the drug at N1.5m.
He said, “The Katsina State Police Command wishes to inform the general public it succeeded in arresting a notorious suspect who specialised in drug trafficking. 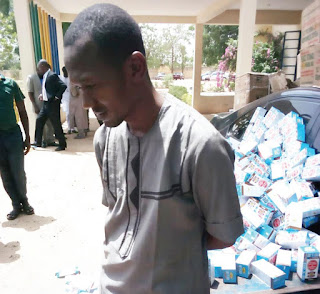 “Police patrol team attached to the commissioner of police Surveillance Squad, Katsina while on routine patrol along Senator Abba Ali Road by Mohd Dikko Stadium, Katsina intercepted a Honda Civic with tinted glasses, loaded  with 300 bottles of cough syrup suspected to be codeine, driven by one Nura Aliyu ‘m’ of Tsohuwar Tasha, Katsina.