The high fees being charged for nomination form by political parties negate the “not-too-young-to-run” law, a United States based Nigerian, Dr. Asukwo Mendis Archibong, has said.
He urged the National Assembly and the Independent National Electoral Commission (INEC) to review the cost.

Archibong, who has expressed his intentin to contest for President next year, said in a statement that “the review is necessary as majority of the youths targeted as beneficiaries of the somewhat encouraging bill, will not be buoyant enough to contest if the cost of nomination form is maintained.”
He added: “A barrier to the youth is the amount to be paid for the nomination forms for the different positions”. 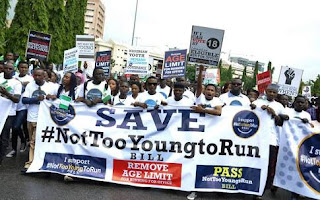 But he urged them to “take advantage of the opportunity the bill offers, to participate in politics, not as errand boys of politicians, but as voters and political aspirants themselves.”
Dr Archibong also called for caution and calm from Nigerians as the police continue their investigations into the Offa robbery incident.
“No one is above the law and everyone is presumed innocent until proven guilty in the court of law”, he said.
Labels: News politics