Inmates at the Medium Security Prisons Oji-River Centre in Enugu State will join other sport loving Nigerians to watch the 2018 World Cup following the provision of a viewing facility in the centre.

The Controller, Nigeria Prison Service, Enugu State, Ndubisi Ogbodo, made the disclosure in Oji River on Monday during a facility tour of prisons in the state.

Ogbodo said it was part of recreational activities meant to fast track the reformation of the inmates.

The controller said the inmates would watch the tournament under a controlled environment manned by social welfare staff of the prisons.

“We provide the recreational facilities like televisions to enable them have access to religious and sporting programmes to keep them busy and prevent them from thinking about escape.

“We also conduct sporting competitions for inmates and other social activities as part of reformation,’’ he said.
“The environment is even something of joy as there is enough ventilation and the inmates are properly taken care of.

“You can see that the inmates are healthy and this showed that they are being well taken care of.


“The toilets, bathrooms, foams and bunks are all in order and the environment is devoid of any offensive odour.

“There is steady water supply and the drugs available to take care of their health, courtesy of the Controller General, Ahmed Jafaru,’’ he said.

The controller however, noted that one of the major challenges of the centre was lack of mobility, as they had only one vehicle to operate with.

“We have four courts that Oji River centre covers for the prison and their locations are far apart so they find it difficult to meet the demand with one vehicle,’’ he said. 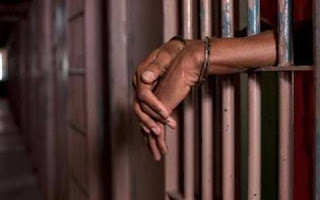 The Controller warned the centre against keeping or accepting people who were below the age of 18 years and juveniles in its custody.
Ogbodo pointed out that it was against the practice adding that the law frowned at such practice.

“Always ascertain the real age of any offender, before accepting the person in the custody,’’ he said.

He commanded the staff of the centre for a job welldone and pledged the support of the service in enhancing their welfare.
Labels: lifestyle Sports