The battle gets tougher in the "land of honour" EKITI 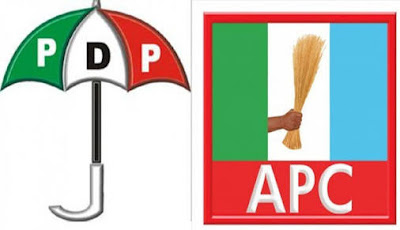 Tension and chaos in just about  six (6) weeks to the scheduled Ekiti state governorship election. Several activities has sprouted within the ruling people's Democratic Party (PDP) and the main opposition party the All progressive congress (APC) in the state.


The journey to the number one (1) seat in the state as promised by the political parties involved is expected to be a smooth ride but from recent indications showing up,  the journey might just be as turbulent  as "Jonah's journey to Nineveh".


Among these indications include

* The emergence of Prof.  Kolapo Olusola as the PDP Candidate followed by Defections from the people's Democratic Party ,and  Also,  the emergence of Dr kayode fayemi of the opposition APC in the state which has sparked several reactions among the party stalwarts in the State.

Within the PDP,  a crisis is said to have lingered when the first and the only runner up of the primary election prince Adedayo Adeyeye who was reportedly .satisfied with the results of the election left the party few days ago on the argument that he and his supporters cannot work with governor Ayodele Fayose because he imposed the deputy governor as the party's candidate.

In a similar light, the APC , although had a violent primary initially but was however able to reorganize it's tent and reconducted a peaceful primary that led to the candidature of kayode fayemi who recently escaped an assassination attempt on his life leaving Michael opeyemi bamidele,  a former APC governorship aspirant injured as a result of the assassination attempt.

As it stands right now,  the peace and tranquility of Ekiti state is threatened by political lords who seek power at all cost.

The state's governorship election which is dated for July the 14th 2018 has the PDP, APC and SDP among other political parties eyeing the top seat of the state.
News politics EKITI GUBER RACE