The Nigerian police force while interrogating the Offa Bank Robbery Suspects has released a video confession of one of the Suspects called AY admitting that he works for the Senate President, Bukola Saraki.

The Nigerian police force yesterday got the approval of president Buhari to summon Bukola Saraki on his alleged connection with the offa bank robbery which led to the death of some police men and residents of the Area..
Bukola Saraki however honoured the invitation of the Police force and is currently been questioned. 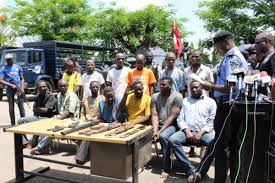 On a similar note, Reno omokri who was a former aide to president Goodluck Jonathan has said "Bukola Saraki is reaping the consequences of betraying president Jonathan"
News politics