15 Year Old Girl Raped By A Group Of Cultists

on July 13, 2018
Some group of cultists, yesterday at the urban axis of Sapele, Delta state,  allegedly raped a 15 year old girl multiple times during initiation into their group. 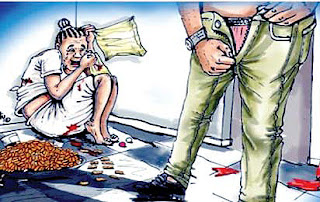 The girl was allegedly lured into the bush where she was raped in the process of being initiated into the cult group.

A source said the cultists had their way with the victim several times before letting her go after the initiation.

The source said the victim who ostensibly couldn’t contain the shame told her parents what happened.

“The cultists believed to be responsible for the rape are currently on the run after their actions were revealed,” the source said.

The state police PPRO, Mr Andrew Aneamaka, could not be reached but a senior police officer at the Sapele Police Area Division said the station was not yet aware as it was yet to be contacted on incident.
crime News