on July 15, 2018
Eight persons were said to have died yesterday in a road crash at Ogbese, on the Akure-Owo Road in Ondo State.

Seven others were said to be receiving treatment at the State Specialists Hospital in Akure, the state capital. 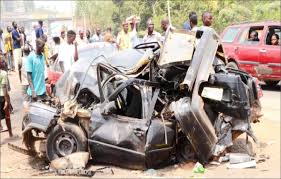 It was learnt that the accident, which occurred at 4 a.m, involved a tractor without a headlamp.

The tractor reportedly collided with a Toyota Hiace commercial bus from Lagos and heading to Jigawa State.

Another truck from Owo was said to have crashed into the two vehicles on the same spot.

The eight of the passengers in the Toyota bus were said to have died instantly and their bodies were deposited at the hospital’s mortuary.

The State Sector Commander of the Federal Road Safety Commission (FRSC), Rotimi Adeleye, blamed the accident on speeding of the drivers.

He warned motorists against night travels.

Adeleye said he had informed the head of the Shasha Market near the scene of the accident to check the hospital for possible identification of the victims, who he suspected must be from the North.

The FRSC chief also led his other officers to clear the debris of the three ill-fated vehicles to allow free flow of traffic on the busy road.