on July 28, 2018
Arsenal manager Unai Emery has confirmed that The Gunners’ Nigerian winger, Alex Iwobi, is close to penning a new deal with the Gunners. 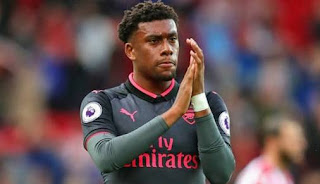 Iwobi has two years remaining on the current contract he signed with the club two years ago.

Reports emerged last week that the North London club have offered him a new five year contract worth £70,000 per week.

And Emery who replaced Arsene Wenger as Arsenal boss has further confirmed the Nigeria international’s status at the club.


“I have the information – he’s near,” Emery said. “First, I want to work with every player, and they are coming,” Emery told reporters ahead of Arsenal’s pre-season clash against Paris Saint-Germain on Saturday.

“Ozil, Iwobi, Elneny are starting to work with us, the first week is very good. My information is he (Iwobi) is going to sign and continue with us.”

Iwobi made 26 appearances in the Premier League last season and scored three times for the Gunners.
Arsenal News Sports