A 29-year-old female student of the College of Education, Akoka, in Lagos, who visited a Muslim cleric, popularly known as Alfa, for spiritual help, is currently barking like a dog after undergoing cleansing in Ikorodu area of Lagos State. 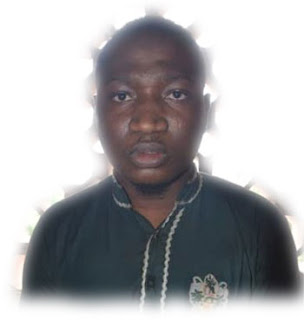 Shock as undergraduate barks after spiritual cleansing by Alfa The Alfa, Mustapha Hammed, 23, who was subsequently arrested, admitted to have put a live frog in the water the undergraduate used to bathe during the cleansing process.

Investigations by the Police further revealed that the suspect raped the student on discovering that she is a student.

Thereafter, he used a piece of cloth to wipe her private part. Parading the suspect before journalists at the command headquarters yesterday, the Lagos State Police Commissioner, Imohimi Edgal, said:

“On July 12, a case of sexual assault by penetration was brought from Bariga Police Station to the Gender Section for further investigation.

“The suspect, Mustapha Hammed, who claims to be an Alfa, was introduced to the survivor through a mutual friend.

“The Alfa deceived the victim, saying he saw in a vision that she was going to die within 24 hours. He took the girl to Ikorodu, Lagos, for cleansing so that she would not die.

“At Ikorodu, he forcefully had canal knowledge of the girl who was a virgin and allegedly wiped off her blood with a white handkerchief.

Since then her father alleged that the girl has been behaving abnormally because she was devastated and traumatised by the incident.”

The suspect admitted to have raped the victim, but denied wiping the blood with a cloth. He said his girlfriend brought the victim to him for consultation and in the process, he decided to marry her.

He said: “I told her (victim) that during divination, I saw that she had a spiritual husband. She confirmed it and said that had been the cause of her problem. I told her she would need to undergo spiritual cleansing in my house at Ikorodu.

“When we got there, I instructed her to bathe and pray three times. After the first bath, I secretly put a live frog in her water. When she saw it, she ran out to inform me.

“I told her it was a bad omen and that the only solution was for her to sleep with a man. I told her to call her boyfriend, but she said I should sleep with her since he was far away.

“I did it because I love her and intend to marry her. But because she is my girlfriend’s friend, I couldn’t express my love for her. I did not clean the blood with a cloth.” The suspect, according to Edgal, will be charged to court.
Labels: News News news