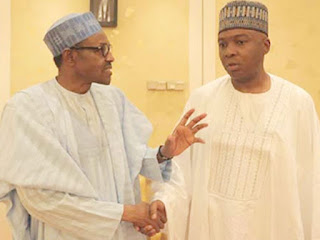 The All Progressives Congress (APC) Thursday made deft moves to avert an impending exodus of its bigwigs to the leading opposition party, the Peoples Democratic Party (PDP).


The peace initiative, Reports gathered, was being spearheaded by President Muhammadu Buhari, who Thursday met with Senate President Bukola Saraki, believed to be the arrowhead of the impending mass movement, and appealed to him to stay back in the party.

Saraki and other aggrieved top members of the APC massed in the reformed All Progressives Congress (rAPC), including Governors Aminu Tambuwal (Sokoto), Samuel Ortom (Benue) and Abdulfatah Ahmed (Kwara) had met with the leaders of the PDP on Wednesday in Ilorin, the capital of Kwara State, to consider the absorption of the rAPC.


It was reported on Thursday that although the PDP leaders, including Governor Nyesom Wike and the party’s National Chairman, Prince Uche Secondus, had gone to Ilorin ostensibly to commiserate with Alhaji Abubakar Baraje, an rAPC chieftain, over the death of his mother, a meeting to discuss their possible crossover to the PDP actually held.

Buhari’s meeting with Saraki, the outcome of which was not made public, held simultaneously with another, between Ortom, who had indicated on Tuesday that he had technically left the APC, and the National Chairman, Mr. Adams Oshiomhole.

The former Edo State governor publicly appealed to Ortom not to return to the PDP.

Report gathered that Saraki’s meeting with Buhari at the Presidential Villa Thursday was set up by APC governors, including Alhaji Aminu Masari (Katsina State), Senator Ibikunle Amosun (Ogun State) and Senator Atiku Bagudu (Kebbi State), who after initial discussions with the Senate president at his Abuja residence on Wednesday night, prevailed on the president to meet with him and persuade him not to defect from the party.

The APC National Chairman Adams Oshiomhole too, spent much of Monday at Saraki’s house trying to straighten things out.

Oshiomhole’s effort was said to have been followed up in Ilorin on Wednesday by the Deputy National Chairman (South), Chief Niyi Adebayo, who led a delegation on a fence mending mission.

Masari, Amosun and Bagudu were said to have advised Buhari to meet with Saraki and the Speaker of the House of Representatives, Hon. Yakubu Dogara, to persuade them to reconsider their decision to move out of the APC as this could adversely affect the fortune of the party in 2019.

The president agreed with the governors and met with Saraki Thursday even as he is expected to meet with Dogara around the weekend.

Although there was no statement after the presidential fence-mending, it was learnt that there was no concrete resolution as both leaders left the meeting with all options left open.
Meanwhile, Oshiomhole vowed Thursday that the party would not allow Ortom to defect to the PDP.

He said the national leadership of APC would do everything possible to ensure that peace returned to the Benue State chapter and that Ortom remained in the party.

Oshiomhole, who spoke to journalists at the party’s national secretariat in Abuja after meeting with Ortom, described the governor as a man of honour that could not afford to eat his vomit.

He said: “In Benue, we are going for a win-win solution. Governor Ortom is not going anywhere, he is a very prominent member of our party, we appreciate his leadership in Benue and we will do everything possible to help those who have issues to have those issues resolved.

“People like Ortom who have honour cannot leave PDP just three and a half years ago with his eyes open and then later there are some tensions in his master bedroom and is thinking of returning to deceiving people. That cannot be an option.

“He is a man of honour and he knows that one should look for one step if you want to take the second step to concentrate the first step, that’s the way to go.”

He said the problem between the governor and his erstwhile godfather, Senator George Akume, would be resolved.

However, Ortom told journalists that the issues were yet to be resolved.

He accused Akume of trying to push him out of the APC.

He said, “I was given red card by Senator Akume, who is the leader of the captives in Benue State and I took it as I was serious enough to make myself available.

“We have spoken to him, he has spoken to me, stakeholders are going to be spoken to and that is where I belong. We have not concluded the matter, it is an ongoing process because I have always stood for peace and I always want peace to prevail.”
2019 defection News politics