Cee C Making It Big As She Secures Endorsement With Nairabet

on July 28, 2018
Life after the Big Brother Naija (BBN) for some housemates has not been easy as most of them have struggled to live up to the hype and expectations of their teeming fans.

The noise has gone down for most of them, while only a few of them have remained in the public space making every moment count for themselves. 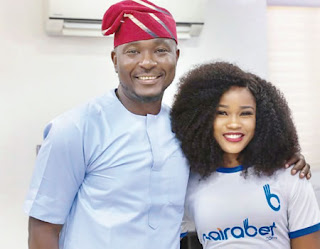 One of such housemates that appears to be enjoying life after the house is Cee C, who was regarded as the most controversial of all the 20 housemates that made their way into the BBN house in South Africa some months back.

Cee C, many feared would find it hard to associate herself with brands due to what some people described as attitudinal disorder, one that pitched her against many in the BBN house while the show lasted.

She was said to have checked herself into a rehab shortly after the show ended and has reportedly got her grooves back on the road.

The deal, which was sealed at the headquaters of the company in Lagos State, was said to have fetched the BBN first runner up a mouth-watering fee that was not disclosed at the unveiling.

Shortly before she was unveiled by Nairabet, Cee C, a lawyer had joined the list of Nigerian celebrities as ambassadors of Numatville Tourism Megacity.

Reacting to how things are beginning to look up for her despite the challenges she had faced, Cee C said the best thing anyone could do for his or herself is to be patient as things unfold.


“I am happy to have secured another major endorsement. This would not have happened without the support of my family and fans. I look forward to an amazing relationship with Nairabet.

Welcoming Cee C to the Nairabet family, founder of the company, Akin Alabi, who is warming up for a seat in the House of Representatives in 2019, said he felt excited having the BBN star as an ambassador of the company.

He also said the endorsement  further confirmed the company’s unrelenting drive to support and contribute to the development of upwardly mobile youths, who are making waves in their respective fields of endeavour.
Nairabet News Youth