on July 15, 2018
Croatia coach, Zlatko Dalić, has condemned the penalty that gave France the second goal in the just-concluded World Cup Final in Russia. 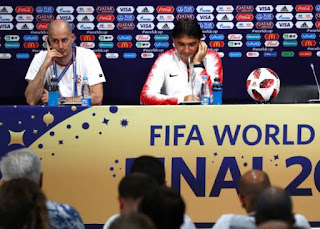 While Dalić agrees that he had to congratulate France for their title, he notes with nostalgia that his team played well.

He stated this in a series of tweets.

“We controlled the game, then there was an own goal,” he says; adding, “You cannot expect a good result if you concede four.”


He is particularly sad that they were beaten on the verge of victory, after winning all their games so far in the tournament.

“If somebody had offered us to be runners-up before the tournament started, that would have been fantastic… But now, there is a modicum of sadness,” he declares.

Commenting on the controversial penalty that fetched France a goal, Dalić says, “I never comment on refereeing, but let me say one sentence… In a World Cup final, you don’t give that penalty.”

He says he needs time to think his nest step through. “What I’m ready for now is a bit of rest… It’s been a tough period, but it’s been beautiful to work for the lads. I’ll take a breather, I never take decisions overnight. At this moment I’m not thinking about anything but going back to Croatia,” he offers.
News News sports