on July 16, 2018
The former interim National Chairman of the All Progressives Congress (APC), Chief Bisi Akande, has expressed his feelings a year after the death of his wife, Mrs. Omowumi Akande, who died after a brief illness on July 11, 2017. 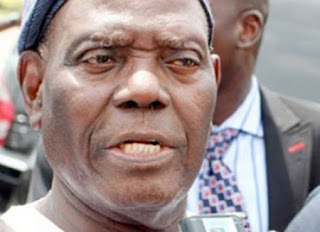 Akande said since the departure of his wife, he had been constantly feeling lonely, vulnerable and hopeless, describing her as a very caring soul mate that took care of him as a mother till her death.

Akande in his speech titled ‘My Life Without My Wife’ at a one year remembrance of his wife on Saturday, said he has never felt so empty and emotionally deserted.He said:

“I became weak and I regretted having involved myself at all in the mirage of our tradition called marriage from the beginning. I did not bargain for my wife to die before me. I am noticing that since that night, I constantly felt lonely, vulnerable and hopeless.

“And since then, despite the constant kindness and support from my friends, associates and relatives, and even in spite of the intensive care and love that my children enthusiastically expressed, I have never felt as empty and as emotionally deserted as I am today.

“Sometimes, I moved around my room in lonely soliloquy with the imaginary sentiment that my wife would suddenly answer me.

At least, she has not once joined me in any conversation nor in searching for my misplaced reading glasses, handkerchiefs and wristwatches in her usual way. She must have been busy preparing a place for me close to her in heaven.

“However, when I see the way our children had been celebrating her memory since she passed a year ago, death becomes very attractive to me. And I have been praying to die such a painless death and for my funeral to be as glorious as that of my wife.”

A primary health centre, located at Isedo 1, Ward 4, Ila-Orangun, was upgraded in honour of the late Akande by her children and prayers were also offered for her soul.


Speaking on behalf of the children, former Commissioner for Health in the state, Dr. Temitope Ilori, said they were commemorating her first year remembrance by giving back to her roots through the project that would impact on the lives of all members of the community.

Ilori said the upgraded health centre would promote healthy living in the community and reduce the burden of health care.
News politics