"l Will Resign As President If Anyone Can Prove God's Existence"

on July 07, 2018
Philippines President Rodrigo Duterte promises to resign from his post if anyone can prove to him that God is real. 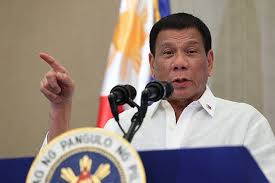 The 73-year-old leader’s remarks came during a speech at a science and technology event on Friday in Davao.

Duterte told the crowd that if anyone can provide him with evidence that humans were able to “talk and to see God” that he would step down from the presidency immediately, according to a report.


At the event, the president expressed criticism at certain aspects of the Catholic faith and questioned the concept of original sin, which he views as a ploy used by the church to make money from baptism that supposedly wipe away the stain of original sin from newborn infants.


“Where is the logic of God there?” Duterte asked.

It would be recalled that last month, President Duterte caused a stir in his nation and across the world when he openly referred to God as “a stupid…son of a bitch” over the logic of the original sin.
Foreign News