Man Dies After "bulletproof" Charm Fails To Save Him

on July 06, 2018
A self-styled traditional healer in Nigeria has died after one of his clients tested his "bullet-proof" charms on him.

BBC reports that Chinaka Adoezuwe, 26, was killed after instructing the man to shoot him as he was wearing the charms around his neck. 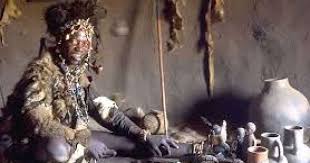 Reports gathered that police in Imo state said the client has been arrested on suspicion of murder.

It was reported that traditional healers are consulted in Nigeria for cures for various ailments.

But there have been several reports of people being killed after testing "bullet-proof" charms and medicines.

According to the report, a villager said that: "A young man had gone to the healer to prepare bullet-proof charms for him, which the native doctor did.

"To prove the efficacy of the new charms, (he) positioned and handed over a gun to his customer. Tragedy struck."

In January, a traditional medicine seller was arrested after a man drank a "bullet-repelling" liquid and was shot dead.

The seller in northwestern Nigeria reportedly assured the man that he could not die if he was shot but unfortunately,  all odds were against him as the gunshot killed him.