Man Kills His Brother For Stripping Their Mother

A 28-year-old man, John Okoye, has allegedly killed his elder brother, Osita, 34, for stripping their mother. 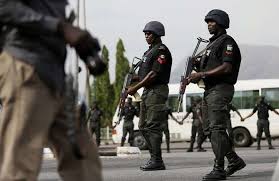 The deceased, identified as a farmer and the first son of the family, was reportedly murdered during a scuffle between him and his younger brother in their family’s compound.


Narrating the incident to our correspondent, the mother of the deceased, Mrs. Joy Okoye, who blamed the incident on the victim’s hot-tempered disposition and stubbornness, said the death could have been averted if he had not retaliated.

She said, “I was resting in my room after preparing the dinner that night when Osita returned home. After having his bath, I offered him food which he rejected, insisting he had a more pressing matter to discuss with me.


“He said he had a misunderstanding with one of his cousins over a land which he had reported to security agents.

“I tried to let him see reasons why the issue would have been resolved within the larger family, instead of involving security agents but all my pleas fell on deaf ears.

“To my greatest surprise, he slapped me and tore my dress. It was while I ran to the backyard to get clothes to cover myself that my second child (John) came to my rescue.

She said the suspect had to defend himself by snatching the knife from the deceased, adding that the scuffle led to Osita’s death.


Describing the incident as unfortunate but avoidable, the 58-year-old widow appealed for the release of the suspect, who she referred to as her only possession, having lost her husband some years ago.

She said, “I appeal to the state government to intervene in the matter by directing the police to release John and allow us to settle it amicably because I cannot afford to lose my two sons this way.

“John is now my only child. Now that he is in police custody, no one is giving him food and there is no transport fare to go and see him. What will I be living for again? Neither of them is married. Their father died some years back.”

The Anambra State Police Public Relations Officer, Haruna Mohammed, confirmed the incident, adding that the suspect would be charged to court after investigations.
Labels: death News