"Mbappe Is Better That Thierry Henry At The Same Age."

on July 21, 2018
Kylian Mbappe is a better player at 19 than Thierry Henry was at the same stage, says France boss and 1998 World Cup winner Didier Deschamps. 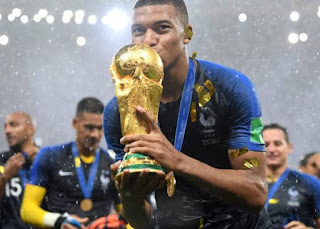 The former midfielder joined an exclusive club this summer when he guided Les Bleus to global glory in Russia, becoming only the third man after Mario Zagallo and Franz Beckenbauer to achieve that feat as a player and manager.

Key to the most recent of those successes was the form of Paris Saint-Germain forward Mbappe, with the teenager making light of his limited experience to become a talismanic presence.

He is already an established performer for club and country, with Deschamps of the opinion that the exciting prospect is further along in his development than star names he played alongside who went on to become modern-day icons.

“He knows he does things others don’t. He’s intelligent, he listens,” Deschamps told Le Parisien of Mbappe.

“I tell him when he does things well, but so many people say that.

“I’m also there to tell him what’s not good, even if that represents only five per cent of his game. He corrects it and he listens.


“In 1998, David Trezeguet and Thierry Henry were his age but didn’t have the same role. Kylian is already grown up.

“I have played with very good players. I have also coached them. But him, it’s not only the quality.

“In terms of his age…With what he does now and what he should do in the future, I have always said, I’m very happy he’s French.”

Mbappe will not turn 20 until December 20, but he has already taken in over 100 appearances at club level and 22 outings for France.

He has netted eight goals for his country, plundered 21 for PSG last season and managed 26 across all competitions in 2016-17 as Monaco swept to Ligue 1 title glory.

There is the promise of plenty more to come, with Mbappe already being billed as the finest young player on the planet and a future Ballon d’Or winner.
News Sports