Neymar Speaks On His Rumored Move To Barcelona

Brazilian superstar Neymar on Thursday sought to quash speculation about his future, insisting he planned to remain with French giants Paris Saint-Germain. 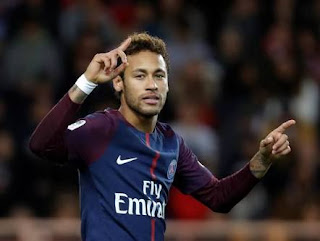 “I’m staying, I’m staying in Paris, I have a contract,” Neymar told reporters at an auction to raise money for his charitable foundation in Sao Paulo.

Neymar, who became the world’s most expensive footballer last year after moving to PSG from Barcelona in a record €222 million deal, has repeatedly been linked to a move to Real Madrid.

The European champions have issued a series of statements in recent weeks denying they have an interest in signing the 26-year-old striker.


Speculation of a Neymar move to the Bernabeu has intensified in the wake of Cristiano Ronaldo’s shock move to Juventus, a development that has left a vacancy at Madrid for an elite, superstar player.

“In the face of the constant reports linking PSG’s Neymar Jr. to our club, Real Madrid C. F. wish to clarify that the club has no intention of making any offer for the player,” a Real Madrid statement said.
Labels: News Sports