on July 24, 2018
African football  has been  rocked by another bribery scandal after  Super Eagles assistant coach Salisu Yusuf was filmed by an undercover journalist  last year allegedly receiving a bribe to include two unnamed players in his squad for the Morocco 2018 African Nations Championship. 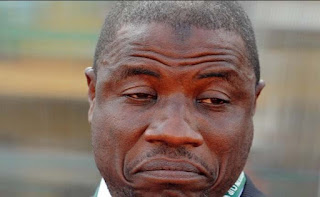 The former Kano Pillars and  Enyimba manager  thus  joined the list of African football personalities who have been implicated in bribery scandals.


In the video, the  coach, who helped Nigeria win silver at the 2018 CHAN,  was promised  15 per cent of the fee if the players made his  squad for the tournament.

The BBC said the footage was part of a wider investigation into corruption in African football by   Anas. But Salisu has denied any wrongdoing after  the sting video.

He  confirmed  meeting with  two persons  who introduced themselves as football agents and that they had a discussion about players for the CHAN in his letter to BBC.

“I can remember giving them my honest answer to the end that if the said players were found suitable in the selection process, they would indeed be selected,” he wrote.

“I did accept $750 handed to me by one of the two agents to the two Nigerian players only as a gift of trivial and symbolic value and not as an inducement to play the two players represented by the two agents as Anas Aremeyaw Anas and Tiger Eye would want you to believe.”

“We have seen the video on the internet, just like everybody else, and these are very serious allegations,” Sanusi said.

“We will be carrying out an internal investigation.”

In a statement released by Salisu Yusuf, He instead claimed that players were picked on merit and their consistency.

“There is nothing in the allegation pointing to a demand for the money from the agents of the two principals. Rather, the agent only handed the money to me after expressing ‘hope’ that the principals would play in the Championship.

“Be that as it may, I did accept cash handed to me by one of the said football agents, which I later discovered, upon checking, to be $750 and not $1000. Nonetheless, my understanding of the FIFA and NFF Codes of Ethics, particularly Sections 20 of the said codes, is that, gifts of any kind could be accepted by persons bound by the codes which are: of symbolic or trivial value; exclude any influence for the execution or omission on an act that is related to one’s official activities or fall within one’s discretion; are not contrary to one’s duties; do not create any undue pecuniary or other advantage and do not create a conflict of interest,” the coach defended.
News NFF Sports