on July 21, 2018
Nigeria will be playing in the Africa U-20 Cup of Nations next year after the Flying Eagles booked their place in the finals with a 5-0 win against Mauritania at the Agege Stadium on Saturday. 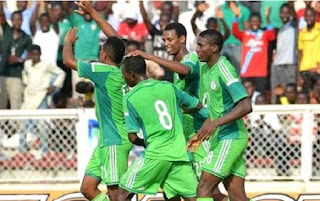 The Flying Eagles thus complete the reverse game of the final round of qualifying with a 6-1 aggregate after drawing the first leg 1-1.

Alalade should have put the homers ahead after six minutes with the goalkeeper at his mercy.

He made up for his earlier miss with the opener from a goal mouth scramble.

It was Nafizi’s turn to show his quality as he calmly slotted home with a cool finish after being one on one with the Mauritania goalkeeper.


The Kano Pillars starlet got his brace shortly after recess to increase the scoreline to 3-0 as the Flying Eagles continued to run riot.

Asuquo then turned his marker before lobbing the ball over the keeper but unluckily for him it went inches over the goal post.


The fans “Oliver Twist” and the Flying Eagles got one more goal after Asuquo was brought down in the 18 yard box.

IK Start defensive midfielder Aremu put the icing on the cake with a well taken spot kick at injury time.

Nigeria will be making an appearance at the 15th edition of the Africa U-20 Cup of Nations billed for Niger Republic between 24 February – 10 March 2019.


The top four teams of the tournament will qualify for the 2019 Fifa U-20 World Cup in Poland.
AFCON News Sports