on July 27, 2018
TEN persons have been arrested for hawking and selling new naira notes in a joint operation by the Oyo State Command of the Nigeria Security and Civil Defence Corps (NSCDC) and officials of the Central Bank of Nigeria (CBN). 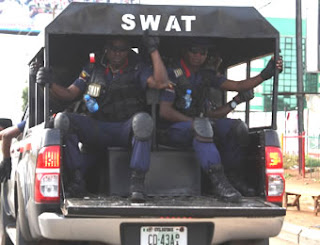 Addressing newsmen on the arrest, Commandant, Oyo NSCDC, Mr John Adewoye, said the suspects were caught in the act during a two-day sting exercise across various hotspots in Ibadan.

He further disclosed that a total of N1,010,040, consisting of various denominations, was recovered from the suspects, adding that three of the sponsors of the suspects had also been arrested.

The operation, he said, was in line with the provisions of Sections 20 and 21 (1)  of the CBN Act 2007 which made hawking, selling and abuse of naira a punishable offence, such that those convicted were liable to a jail term of six months or fine of N50,000 or both.


Adewoye who was flanked by Assistant Commandant General, NSCDC, Mr Waheed Bamidele, gave an assurance that the arrested persons would be charged to court.

while investigations were on to track the chain of godfathers behind the act of hawking of new naira notes.

He said NSCDC would be embarking on other sting operations to stop abuse of the naira, ranging from spraying at parties to soiling, writing on it, squeezing, handling and counterfeiting the notes.

One of those arrested, Wahab Dotun, said he had been in the business for eight years, operating at the Agodi Gate area of Ibadan, while he got the funds from a supplier at Iwo Road.