on July 24, 2018
Senate President, Bukola Saraki met with the Speaker of the House of Representatives, Yakubu Dogara, on Tuesday night. 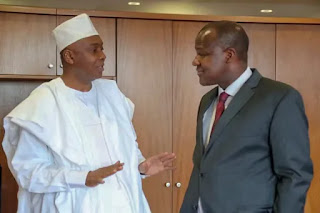 Saraki posted a picture of himself with Dogara on his Twitter page and wrote: “Chatting with Speaker Dogara a few minutes ago.

“We will continue to work to strengthen our democracy and guarantee the independence of the legislature.”


This comes hours after no fewer than 15 senators of the ruling All Progressives Congress (APC) defected to the Peoples Democratic Party (PDP).

The defectors cited crisis and factions within the party as the reasons for their defection, saying they cannot continue to pursue their political careers under the ruling party.

Similarly, a total of 37 members of the House of Representatives announced their official defection from APC to PDP.

An analysis of facts and figures on Tuesday showed that the present number of Senators from the ruling All Progressives Congress, APC, has drastically reduced to 48 from the 63 members that accorded APC the majority status in the upper legislative chamber.

Also, the number of the opposition Peoples Democratic Party, PDP, lawmakers has risen from 43 to 58.


What changed the status quo was the mass defection of the 15 APC lawmakers earlier on Tuesday.

However, it is worthy of note that the total number of lawmakers that should be in the Senate is 109, however, the sum of those in the PDP and APC comes to 106.


Senator Victor Umeh, who is the only member of another opposition political party known as All Progressives Grand Alliance, APGA, represents the Anambra Central senatorial district, while two other senators out of the 109 members of the Senate are dead.