See What This Security Did That Landed Him 2-Years Imprisonment

AN Ikeja Magistrates’ Court in Lagos on Wednesday sentenced a 28- year-old security guard, Salisu Usman, to two years in Kirikiri prison for treating patients, while posed as a qualified medical doctor. 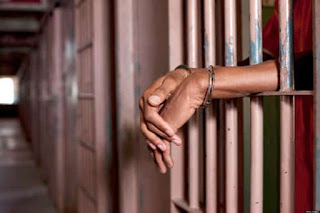 Osunsanmi, who sentenced Usman without an option of fine, ordered that the convict should serve the sentence with hard labour.

Usman had at his arraignment on July 18 pleaded guilty and was remanded in prison.

When the case was called up for fact and sentence, he still admitted guilt.


The accused, who resides at Oluwalogbo, Isefun in Ayobo, Lagos, pleaded with the court to temper justice with mercy in sentencing him.

Earlier the Prosecutor, ASP Ezekiel Ayorinde, had told the court that Usman committed the offence on July 6 at Baden Junction in Ayobo, Lagos.

He said that Usman deceived many people in to believing that he was a qualified medical doctor.

“The accused, who parades himself as a medical doctor treats, dispenses, supplies, administers and sells poisonous and dangerous drugs to patients.


“He was found with different types of tablets, syringes, needles, injections and other medical items.

“But when he was asked to present his certificate or identity card, he could not.

“He confessed that he was not a genuine doctor and he was, therefore, taken to the police station, “the prosecutor said.