Should Security Allowance Be Scrapped? Read Reactions And Drop Your Opinions Below

on July 20, 2018
Every month, huge unaccounted-for money called security votes are allocated to the presidency, governors and local government chairmen for security purposes. Yet, there seems not to be any sustainable improvement in the country’s security situation.
Below are some opinions : 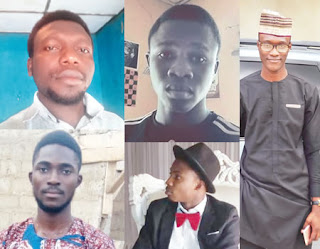 Firstly, the idea that brought about the security vote is a good one, which should not be ruled out. However, the ideology behind it would only produce significant positive results if it is judiciously utilised. Security is one of the cardinal points a nation should invest in so as to make the country safe for lives and property of the citizens. Having no security in a country is just like building a house without a door, which makes it vulnerable to both internal and external criminal activities. Security vote should not be scrapped. Rather, it should be reorganised and systemised to meet its purpose.


Security vote is legal and cannot be scrapped. The question is: are we feeling the impact? The answer to that itself is relative, depending on your location. Some states are using this fund judiciously. While the bulk of the fund used by security agencies is disbursed by the federal government, the state governments help out too. The security votes should be sustained. Scrapping it totally would be a disaster.


The problem with the entire system is lack of accountability and feedback on the part of the beneficiaries of the security votes. It is just that, more often than not, the bulk of the money is not used for the intended purpose. Security vote is good, if we were in a serious and sensible society. The beneficiaries are supposed to use the money for that which it was intended and give feedback to the people on how they spent the money. Security vote should not be scrapped. Rather, there should be proper documentation and accountability of it.


We all know little action comes after collecting this fund, but we will not say they do not use it at all. Take the just concluded Ekiti election for example. We know it did not go as it supposed to, but it was safe enough. Let us imagine the fund was not there, politicians will use that as an excuse to intentionally hire cultists and other unscrupulous elements to disturb the people. It would have been rough.  People would have used that opportunity to do evil, and lives would have been lost during the Ekiti election. As much as we know that we are a corrupt people/nation, we can only continue to pray, hope and act on moving forward.


I just feel everything affecting us in this country is bad leadership and ignorant people. The more we keep voting for unaccountable people, the more messed up the country will continue to be. Security votes or not, the state of security in the nation needs a total overhaul and that is why the funds should not be scrapped.

Scrapping or abolishing security votes will be throwing away the baby with the bath water. I just think there is a need for accountability in governance and how funds are being spent. This kind of issue also does not just cut across security, it cuts across every other sector, in varying degrees, definitely.

The utmost reason the security votes are allocated to the presidency, the governors and the LGA chairmen is that they would have ample resources to enable them discharge one of their primary functions, which is the overall security of the nation, from the federal, to the states and the grass-root levels. However, events over the years have consistently proven that the so-called security vote is not put to judicious use, as evident in the total breakdown of the country’s security apparatuses. As such, it would be in the best interest of the nation if the “security vote” is discontinued and the money used for more vivid developmental projects.

The security situation of the country, at the moment, is nothing to write home about. Scrapping or suspending the security vote would be another excuse for the inability of our leaders to protect us. I would rather recommend that there should be a way or system that would make the concerned people accountable. Then, Nigerians for once, would experience what it means for a government to secure lives and property of its citizens.

If it is suspended, the little security we are getting that we think is nothing, might be what is stopping terrorists from attacking on a larger scale. So if it is suspended, we will create an enabling environment for unscrupulous elements to carry out their enterprise. While security vote is not to be suspended, a legal framework must be put in place to ensure a balance.

Security votes should not be suspended. The money is not a waste in all the states. So, it is not a one-way street. The federal government that oversees the disbursement of the money is equally lackadaisical about security. So, that explains the flaws.

Although we cannot speak for every state, insecurity is something we would always fight. We are only trying to reduce it to the barest minimum. Where are the funds going into? Of course nowhere. I would rather that there should be a strict monitoring apparatus for the fund. But withdrawing the vote because of insecurity would add salt to the injury.

We cannot scrap out good policies because of corruption. Security vote is a good policy. It is our corrupt, selfish and greedy leaders that are the problem. We should look for ways to make this wicked leaders pay dearly for their wickedness which would serve as a deterrent to others. Leaders are people who can die protecting the lives and the courses of their people. Unfortunately, our leaders have no value for life. They only want to enrich themselves with the money meant to protect their people. They use the security vote to eat and drink to the detriment of Nigerians blood. Scrapping out security vote is not the solution, because the beneficiaries would devise crook ways to bring it back. These leaders are strong and desperate, and they can kill to confiscate our public funds. They should sustain the security vote, but they should find ways to checkmate the beneficiaries from abusing it.

The country is divided. This government is not capable of handling anything. The people running this government should stop playing games with the security vote. Nigerians are tired of them, and they think they can buy everybody’s votes? They think they can rig the elections in 2019, the way they rig the one in Ekiti? It is a lie. They should all go. People in the presidency should stop pretending as if things are working well. Things are not working well. That is the fact. Security-wise, they have failed woefully. No security anywhere. Nobody is safe anymore in this country. The security vote should be scrapped because security is zero.

Security is needed in every nation, even in our families. So, basically I think the security vote should be sustained. But as regards the sustenance, we should go back to the drawing board. There is no way you can sustain something that is already bad. We should go back and restructure everything. I opine that it should be scrapped but not in totality, because scrapping it totally will not help. It should be scrapped, then reformed. That will help. And generally, Nigeria has to be reformed. If we reform Nigeria, then the security vote will be effective.

It should be scrapped. On a lighter note, the government can give the money to the citizens to employ their own security.

I still insist that it should not be scrapped. Without money, can there be personnel employed for the sake of security? The police force needs competent hands. Their vans need petrol. Where exactly is the money going to? Or what for? If an enterprise is not yielding profit or result as expected, there is need to check it. Has there been any improvement in the states that have received it so far? Security is key. Government has to be in charge of it. My conclusion is: if the money is not working, let us try something else then.