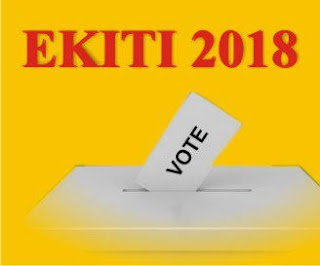 Today, 667,064 eligible voters who have collected their PVCs out of 913, 334 registered voters are expected to file out across the 2,195 polling units spread across 177 wards in 16 local government areas of Ekiti State to elect a governor who would be saddled with the mandate of running the state for the next four years.

Adequate security has been assured as no fewer than 4, 390 combined forces of soldiers and other paramilitary personnel will be deployed to complement the 30,000 policemen who have been drafted to Ekiti to monitor the election.

Police The atmosphere in the Ekiti election week has been charged, anxiety is beginning to set in, the fear of the unknown is palpable,   intrigues, permutation, alignment and realignment of political friends and foes are becoming very noticeable.

Deputy Inspector General of Police (DIG) Operations, Mr. Habilal Joshak, told the gladiators that all their security details would be withdrawn from them from the eve of the election till after the election.

According to the Deputy Inspector of police, who has been put in charge of the security affairs for the July 14 election, this would add to the credibility of the Ekiti governorship election.

The police boss said, “We won’t allow anybody to go to the polling booth with armed men, this is a breach of the Electoral Act. “We have contacted them and they have to be here before election commences.

This election must not be compromised.

They will be documented and whoever defies this will be sanctioned, because they have been contacted”, he warned.

“If you cast your votes, you can keep a distance and protect your votes, but if you snatch the ballot, we will cut off your hands, if you run with it, we will stop your legs.

“Our duty is to secure not only the electoral materials but also all the citizens.

We are going to be professional and watchful, because we don’t want to be bedeviled with cases of hooliganism, ballot snatching and hate speeches before, during and after this election”, he said.

The big two, the People’s Democratic Party and All Progressives Congress, which are the major foes in Ekiti election tried to court the smaller parties.

This became obvious during the Mega PDP rally of the PDP on 5th of July where 18 political parties in the state were said to have pledged their support for the PDP candidate, Kolapo Olusola.

Also, on Wednesday, two days after the APC mega rally on the 10th about 12 political parties adopted the candidate of the party Dr Kayode Fayemi.