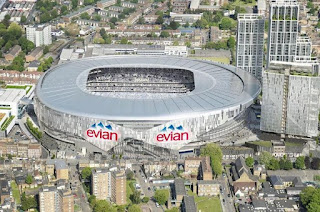 Spurs have now confirmed the name of their new stadium, while also announcing that the former branding will acknowledge the club’s North London location.
Only Manchester United’s Old Trafford, with a capacity of 75,653, will boast higher Premier League attendances than Tottenham next season.
Work on the stadium is in its final stage ahead of test events scheduled for August 27 and September 1.
The North London club will then welcome Liverpool to their new home on September 15 for the first Premier League match to be held at London’s biggest club ground.
A statement on Tottenham’s official website read: “We are delighted to unveil our new stadium’s brand identity.

“As well as becoming a new, world-famous home for Tottenham Hotspur, our new stadium will also stage NFL matches, concerts and other major events, as we look to create an iconic global sports and entertainment destination in Tottenham.
“Our new stadium will currently be known as Tottenham Hotspur Stadium with the ‘A’ of the word ‘Stadium’ stylised to create an arrow pointing north, to represent our proud North London heritage.
“Further nods to our history can be found throughout the stadium, with club mottos adorning the elevations of the building along with our distinguished cockerel crest cast in concrete around the stadium perimeter.
“Inside, you will find feature bars such as The Shelf and The White Hart, as well as the polished concrete floors made from crushed aggregate taken from our beloved former home, White Hart Lane.”
EPL News Sports