The strength of any nation is not revealed in peacetime, rather in times of emergencies. Here, we examine the twists and turns in the 17 days of Thailand’s national travail, and lessons that countries like Nigeria can learn. 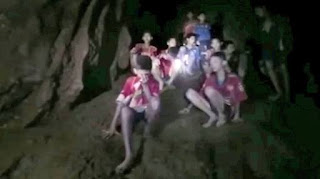 Thailand stood still for 17 days for the safe return of the members of the “Wild Boar” team, consisting of 12 boys and their Coach, Ekkapol Chantawong, who were trapped in the Tham Luang cave.

The national apprehension was heightened by the dangerous position of the cave in which they were trapped, more so, the heavy rains forecast and fears mounting over the reduced oxygen and high level of water in the cave.

Seeing the amount premium the Thai government and its people placed on the life of these lads and their coach, the entire world remained on edge, while the efforts to rescue them lasted.


What began as a local search for the missing 13, turned into a complex rescue operation, involving hundreds of experts, who flew into Thailand from around the world to help. When the operation was concluded, Tuesday, it was not only the Thais that heaved a loud sigh of relief, the entire world did.

In terms of moral lessons for Nigeria, where care for human lives seems to have taken back stage, experts say, Thailand, as an underdeveloped or a Third World Country, by global economic ranking, has demonstrated that it is a ‘Caring Society.’

They have also contended that, this feat is contrary to most African countries, where the lives of citizens seem to mean less to the authorities and the people themselves. In the last few decades in Nigeria, there have been alarming and shocking deterioration in value for human lives, human compassion and social solidarity.


These attributes have manifested in various forms to bring shame and contempt to Nigeria, among the comity of nations. As demonstrated by a caring society, Thailand, the items and equipment meant for the operations were not diverted or plundered.

The second lesson is that, the spirit of national pride and individual sacrifice prevailed throughout the 17 days of national apprehension.

In Nigeria, complaints of diversion of equipment, relief material to people in desperate situations have become common place. This so enervating that, officials of government are no longer ashamed of being accused of diverting relief materials meant for the IDP.

Instead of working like divers in the Thai Rescue Operation to bring succour to the Internally Displaced People (IDPs), allegations are rife that these vulnerable people were taken advantage of by the same officials, whose responsibility it is to take care of them.


Another remarkable lesson to be learnt is that, while the ordeal of the parents, boys and their coach lasted, one thing was clear, both parties believed in the resolve of their government never to abandon them to their fate, judging by the content of the letters from the boys to their parents, and parents to their children trapped in the cave.

The 25-year-old coach of a youth football team, Ekkapol Chantawong, offered his “apologies to the parents” of the boys in a scrawled note released by the Thai Navy last Saturday.

“To all the parents, all the kids are still fine. I promise to take the very best care of the kids,” he said in a note given to a diver on Friday and published on the Thai Navy SEAL Facebook page last Saturday.


“Thank you for all the moral support and I apologise to the parents.”

Other touching notes signed by members of the “Wild Boar” team in the cave were directed to their families, many of whom have kept an anxious vigil outside the cave for a fortnight. Along with the coach, the kids also wrote heartfelt notes to parents, “I am fine but the weather is cold”, wrote one kid. Another boy, who gave his nickname as “Bew”, wrote.  “Don’t worry dad and mum, “I have been away for two weeks but will come back and help you sell your stuff.” His family are shopkeepers. Another note, from “Dom” said he was “fine but the weather here is a little cold”. 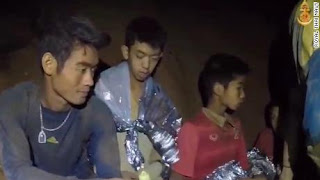 Another lesson is, if government and its people instil in their people, the ‘spirit of patriotism’, it will show in times of national emergencies. This is because, in the operation, a former Thai navy diver died in the caves on Friday. Saman Gunan, was returning from a mission to provide the group with air tanks, when he ran out of oxygen.

Confirming the completion of the rescue operation, the Thai Navy Seals Facebook page announced: “All 12 Wild Boars and coach have been extracted from the cave. All are safe.”

Families in Chiang Rai gathered at the hospital to watch the final ambulances bring in their precious cargo. Some said they couldn’t believe it, others said they had never lost hope. All wore the brightest of smiles.


Up on the eighth floor, doctors – who declared this morning that the first eight boys to be rescued are doing well – will now be examining their remaining teammates and their coach. Psychologists will be assessing the impact, which a fortnight of being trapped underground, has had.

The Wild Boars footballers went into the Tham Luang cave as a team. They survived as a team. And tonight, at the end of a remarkable 72-hour rescue, they are together as a team once again.

A team of 90 expert divers – 40 from Thailand and 50 from overseas – worked in the Tham Luang caves.


They guided the boys and their coach through darkness and submerged passageways towards the mouth of the cave system.

Getting to and from the trapped group, was an exhausting round trip, even for experienced divers. The process included a mixture of walking, wading, climbing and diving along guide ropes. Wearing full-face masks, which are easier for novice divers than traditional respirators, each boy was accompanied by two divers, who also carried his air supply.

The toughest part was about halfway out at a section named “T-Junction”, which was so tight that the divers had to take off their air tanks to get through.


Beyond that, a cavern – called Chamber 3 – was turned into a forward base for the divers. There, the boys could rest before making the last, easier walk out to the entrance. They were then taken to a hospital in Chiang Rain.

The last of the rescue team – three Thai Navy Seals and a doctor – emerged from the cave complex some hours after the last member of the trapped group was released.

Captain Duganpet Promtep, 13, is described as a motivator and highly respected by his teammates. Several Thai professional clubs had apparently scouted him.

Myanmar-born Adul Sam-on, 14, speaks several languages, and was the only team member to be able to communicate with British divers when they were first discovered. 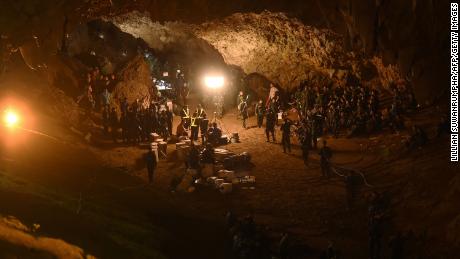 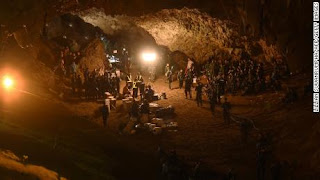 It was 17-year-old Peerapat Sompiangjai’s birthday when the group became trapped in the cave. The snacks the boys brought with them to celebrate are likely to have helped them survive their ordeal.

Assistant coach, Ekapol Chantawong, 25, was said to be the weakest of the group when they were found, as he had reportedly refused to eat any of the food and gave it instead to the boys.

How Did The Rescue Work?

Round-the-clock pumping paid off with conditions said to be walkable in some parts of the cave. But the rescue operation still hinged on the boys using scuba equipment despite having no previous diving experience. Each boy was to be accompanied by two divers with the rescuers facing an 11-hour round trip.

After 18 days, the final four boys and their coach were rescued from the cave to complete the three-day rescue operation. The last of the Wild Boars then followed their teammates to the hospital where they are to be kept in isolation for up to seven days to avoid the risk of infection.

The final chapter of the extraordinary mission appears to have continued in the same successful vein as previous days with heavy overnight rain not affecting conditions in the cave.

Pumping had reduced water levels significantly but another deluge risked stranding the group for months. Concerns about the air quality inside the cave were also growing after the death of a rescue diver, Saman Kunan.

Authorities declared they had a three- to four-day window to free the group because rainfall was forecast to grow more intense, as seen in visualisations of storm intensity and rainfall for the coming days
government News