on August 12, 2018
Forty-nine Senators of the Peoples Democratic Party, PDP, have written to Senate President, Bukola Saraki, to inform him of their vote of confidence in his leadership, and that of his Deputy, Ike Ekweremadu. 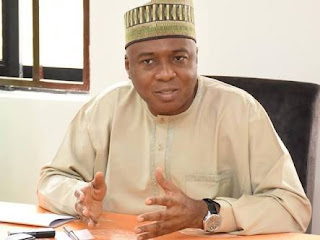 National Chairman of the All Progressives Congress (APC), Comrade Adams Oshiomhole had on Friday vowed that the party will work for his impeachment “in accordance with the law”.

It was reported how the 49 Senators jointly declared their support for the duo last Tuesday.


The development followed the siege on the National Assembly.

Acting President Yemi Osinbajo, in a swift reaction, sacked Lawal Daura as the Department of State Services (DSS) Director General, for what the presidency described as unauthorised action.

On Sunday, a source close to one of the lawmakers told our correspondent that Saraki received the letter of support at the weekend.

He said: “The PDP Senators expressed their support for him and Ekweremadu. They also condemned the invasion of the legislature by law enforcement agencies.

“The stated that any they are against any illegal impeachment and emphasized that the plot by the APC was – in their words – dead on arrival.

“I can also confirm to you that the two Senate leaders also have some support within the APC caucus.”

Meanwhile, the Peoples Democratic Party (PDP) said it had “uncovered a fresh plot by the All Progressives Congress (APC) and the cabal in the Buhari presidency” to use security agencies and the Economic and Financial Crimes Commission (EFCC) to invite, arrest and detain Saraki and Ekweremadu.

PDP raised the alarm in a statement on Sunday by his spokesman, Kola Ologbondiyan.

He said: “It is part of renewed design to keep them out of circulation, ahead of Senate resumption, so as to enable the heavily induced APC senators, who are now in the minority, to throw up two of their members as Senate President and Deputy Senate President respectively on the excuse that Saraki and Ekweremadu failed to show up for proceedings in the Senate.

“The PDP notes that the new plot to cage Saraki and Ekweremadu, in devilish rehash of the Tuesday July 24, 2018 hostage-taking and invasion of their official residences by security agencies is coming after the August 7, 2018 failed attempt to use security forces to take control of the leadership of the Senate.

“Apart from plots to arrest and detain Saraki and Ekweremadu, the PDP has also been made aware of plans to use the EFCC and security forces to clamp down on their family members, including their wives and siblings as well as close associate, all in the effort to weaken their resolve”.
Nass News politics