The demise of a 52-year-old Sesan Osinsanya, threw Makoko community, a suburb of Lagos, into confusion when his body was found dangling from a rope in the ceiling of his apartment at Celestial Church of Christ, Parish 1, Makoko, Yaba. 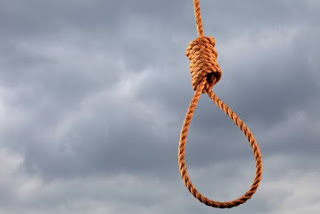 An octogenarian identified only as Mrs Osinsanya may not know her son is dead until the end of August when she would visit him for her monthly pocket money.
Sesan was a security guard at the church, where he also lived.

It was learnt that the man lost his only son 11 years ago at the age of four and his wife divorced him afterwards. He had remained unmarried since.

It was gathered that Sesan started working for the church as a driver, but was later relieved of the job after some years and redeployed to the security post.

He reportedly earned N15,000 salary out of which he gave his aged mother N5,000 every month.

A relative of the deceased, Jubril Sodeinde, explained that he was shocked when he received a call from the church on Tuesday morning that Sesan was found dead in his apartment.

He said despite the tough times the native of Ijebu-Mushin, Ogun State, had gone through, he was friendly and cheerful, adding that Sesan’s mother had yet to be informed about the incident.

He said, “We saw each other a week ago and he invited me to the church programme. He was a very nice person to be with. He would always make you lively whenever you come across him. I could not believe he could kill himself.


“He was a security guard in the church. He received a salary of N15,000. There was an agreement with the church that at the end of the month, his mother would collect N5,000. The mother is 84-year-old. We don’t know how to break the sad news to her yet.

“She would probably know at the end of the month when she goes to collect the money for the month of August. His only child died 11 years ago and his wife left him. He had been living alone since then.”

An official of the church, who did not want his name because he was not authorised to speak to the press on the matter, said he could not tell why Sesan committed suicide.

He said, “I am not entitled to speak to the press. He was the only person who knew why he killed himself. He was a freeman; nobody troubled him. How much was he collecting that would make the church to owe him. We reported the case to the police and the necessary steps were taken. He had been buried. I am just two years in this church. I met him at the church.”

The spokesperson for the police in Lagos, CSP Chike Oti, said policemen from the Adekunle division removed the corpse and deposited in Mainland General Hospital morgue, Yaba, for autopsy.

He said, “On Tuesday, August 7, around 1pm, the police received a distressed call that a 52-year-old security guard at Celestial Church of Christ, Makoko Parish 1, Yaba, allegedly hanged himself to death with a rope tied to the ceiling fan anchor in his room on the church premises.

“The scene was visited and photographed by detectives. The corpse was evacuated and deposited in the morgue for autopsy. Investigation is ongoing.”
News suicide