Court Sentences Father Of Seven To Death By Hanging

Justice Ntong Festus Ntong at the Ikot Ekpene Division of Akwa Ibom State High Court, on Friday, ruled over a murder case which had been on for four years by sentencing the accused, Friday John Uko to death by hanging. 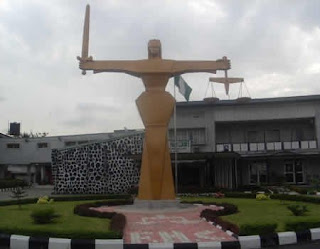 Friday was accused and later convicted for the murder of his pregnant wife, Patience.

Ntong ordered that tht555e accused be hanged in the neck until he dies.

Uko, who hails from Ikot Ossom in Obot Akara Local Government Area of the state, committed the offence in August 2014.

The court held that the convict kicked the mother of seven who was then pregnant with their eighth child in the stomach and pushed her to the ground thus leaving her bleeding.


An argument it was gathered ensued after Patience took the sum of N1, 000 from her husband’s pocket to prepare a meal for the family.

In handing down the death sentence, Chief Ntong expressed sadness at “the callous behaviour of  Friday towards his pregnant wife who according to him, should be pampered and courted until she delivers the baby.

“The accused pushed his wife down, knowing that she was pregnant and ought to be pampered and treated with love instead of violence, “the judge said.

He added that, “the case is a straightforward one since the accused told the court through his extra-judicial statement, that he caused the death of his wife by kicking her because of a misunderstanding over N1,000.”


Ntong  stated that anyone who unlawfully kills another is entitled to face the law, noting that “the instant death of the pregnant wife on the spot showed a deliberate intention to kill because of the heavy force the husband exerted” and prayed God to have mercy on his soul.

The convict whose lawyer was not in court at the time of the ruling, prayed the court to show him mercy and save his soul in order to take care of their seven children.
Labels: conviction death murder News sentence