Dino Melaye To Oshiomhole: " You Have Brain Arthritis"

on August 06, 2018
The Senator representing Kogi West District, Dino Melaye, has taken a swipe at the National Chairman of the All Progressives Congress (APC), Adams Oshiomhole, over his claims that the seat of the Senate president belongs to the ruling party. 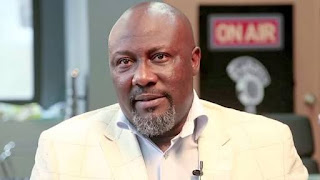 Melaye who was briefing journalists in Abuja on Sunday, expressed disappointment in Oshiomhole and condemned him for referring to the seat of the Senate President as a ‘crown’ that belongs to the APC.

The lawmaker accused Oshiomhole of exhibiting what he called “brain arthritis” and intellectual stagnancy for not taking time to look at the Constitution and the extant laws of the country to know that crowns are worn in the kingdoms, villages and communities; rather than in the National Assembly.

“I cannot understand why the national chairman of a party will not know that the seat of the Senate president is of the Federal Republic of Nigeria and has no party affiliation.

Then, he appropriated the seat to APC, forgetting that even those who elected the Senate President were from the PDP,” he said.
News party politics politics