on August 12, 2018
Dozens of miles of bike lanes across New York City are intended to make its chaotic streets safer for the growing number of commuters and tourists who prefer to pedal around, the way that crosswalks are meant to carve out a safe space for pedestrians. 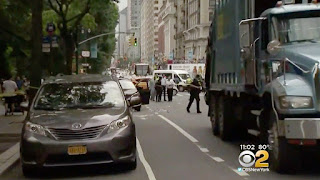 But like crosswalks, the safety of the bike lanes depends on the cooperation of motorists who often cross the boundaries.

Here and elsewhere, it makes for a dangerous competition that sometimes ends with someone getting hurt or killed.

That was the case on Friday, when an Australian tourist on a bicycle died after she was hit by a garbage truck on Central Park West near West 67th Street around 4:45 p.m.

The truck struck the tourist, Madison Jane Lyden, 23, after she swerved in its lane to avoid a livery cab that had cut her off in the northbound bike lane.

Ms. Lyden had been visiting New York on what her parents described as the “the trip of a lifetime.” Bystander video showed a crowd surrounding her as someone attempted to revive her, but she was pronounced dead at Mount Sinai West hospital.

Mayor Bill de Blasio, who has overseen the creation of more than 66 miles of bike lanes since 2014 under his Vision Zero plan, which aims to eliminate traffic fatalities, visited the scene on Friday and said he was disgusted by what happened.

The driver of the garbage truck, Felipe Chairez, 44, was charged with driving under the influence of alcohol. In a court affidavit, the police said Mr. Chairez had watery and bloodshot eyes, and registered a blood-alcohol level of .04, the legal limit for commercial drivers. He also told a police officer that he drank two beers before the crash, according to the affidavit.

Mr. Chairez’s lawyer, Kenneth Ware, said in an interview that his client might also have eaten a chicken salad sandwich.


A judge temporarily suspended Mr. Chairez’s license and released him on his own recognizance.

Just as Ms. Lyden’s killing mobilized the cycling community in New York, it resonated among activists in Australia, who noted that the perils she faced were not limited to the busy streets of Manhattan.

“All around the world we need to do more to protect people riding bikes,” said Craig Richards, the chief executive of the Bicycle Network, an organization based in Melbourne advocating for cyclists.

“As a city we should be ashamed, because this death could have been prevented,” said Paul Steely White, the executive director of Transportation Alternatives.CreditWCBS-TV
“To ride a bike in New York City, especially in Central Park, is a dream come true for many Aussies. It should be something you talk about for the rest of your life, not the end of your life.”


The livery cabdriver was not ticketed, even though the police said he had been parked illegally in front of a bus stop and pulled out into the bike lane.

The number of cyclists killed in traffic collisions in the city has held relatively steady since 2000, but as the number of riders has increased, so have calls for city to step up its efforts to protect them.

Ms. Lyden was the ninth cyclist to die in a traffic collision this year, according to the mayor’s office. This time last year, 12 cyclists had been killed. Twenty-three cyclists were killed in 2017. Since 2000, the range has held between 12 and 24, according to the annual Vision Zero report.

Paul Steely White, the executive director of Transportation Alternatives, a nonprofit advocacy group, said the accident on Friday was “a crash waiting to happen.” 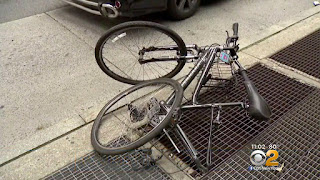 “Every day in this city, bike lanes meant to protect people on bikes are used as drop-off lanes, parking lanes, and idling lanes for lazy and entitled drivers,” he said. “As a city we should be ashamed, because this death could have been prevented.”

As more people use bicycles to get around, Mr. White called for the city to install protected bike lanes on every major street. About 25 miles, or less than half, of the bike lanes installed under Mr. de Blasio have protective barriers.

Mr. Richards said the majority of crashes in Australia involving bicycles are caused by people driving vehicles. About 40 bicycle riders in Australia are killed in crashes every year, a figure that has held steady for at least two decades, according to a report examining deadly crashes conducted by the Bicycle Network.

Ms. Lyden was traveling from Geelong, Australia, a port city near Melbourne, where she had worked for just over a year as a swimming teacher, lifeguard and receptionist at public recreational facilities, officials said. Ms. Lyden appeared to travel abroad regularly, posting on Facebook a photograph of her plane ticket as she left for Bangkok and a selfie with the Mona Lisa over her shoulder.


She had grown up in Tasmania, in a suburb of Hobart, the capital city. Her father runs the family’s prominent construction and design company, which, in 2011, built a house named for Ms. Lyden to raise money for a charity supporting people with diabetes, a condition that she had, according to news reports.

She moved to Geelong, along Australia’s southeastern coast, several years ago for college. “It was not long ago that we celebrated our graduation together,” said one friend, Caity Ashton, who met Ms. Lyden when they were both students at Deakin University, according to The Geelong Advertiser newspaper. “I made a lifelong friend. She was incredibly intelligent and so full of life.” She added, “She was so beautiful both inside and out.”
accident News