on August 16, 2018
The Independent National Electoral Commission (INEC) will no longer tolerate vote buying during elections emerged on 16th August, during the presentation of licenses to 23 new political parties at the Commission’s headquarters in Abuja. 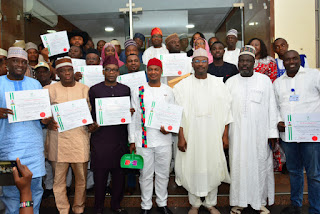 Chairman of the Commission, Prof. Mahmood Yakubu seized the moment to announce three measures to be immediately adopted to curb the phenomenon.

Speaking before an impressive audience of leaders of the new political parties and their associates, Prof. Yakubu declared: “The Commission is deeply worried about the way our elections are becoming increasingly monetized. Vote buying is a cancer to our elections and we must work together collectively to stamp it out”.

He asserted that starting with the Osun state governorship election slated for 22nd September 2018,  “we will change the way our Polling Units are administered, such that there will be no room for voters to expose their marked ballot papers between the voting cubicles and the ballot boxes”.

On the second measure, the INEC Chairman said the Commission would continue to review its strategies in consultation with security agencies “for a more robust response for the arrest and prosecution of vote buyers.”

On the third measure, he said: “We will also engage with all well-meaning groups for effective voter education and sensitization.”

He said: “from today, you are recognized as political parties under the law and you have equal status with any political party in Nigeria.  This means that you can sponsor candidates for elections, including the 2019 general elections”.