Jigawa State governor, Alhaji Muhammad Badaru has said that the state will soon start the exportation of goats to Kuwaiti and other Arab countries as its goats multiplication farming programme begins to yields results. 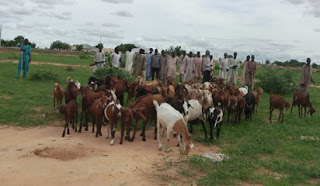 The Badaru Abukar poverty alleviation scheme to generate forex.
The state government had distributed over 600 goats to 220 women in 2016 Jigawa State in its goats multiplication farming programme.

Each of the women were given three goats and they were expected to make certain returns to the government over a certain period.

Governor Badaru who spoke at a seminar on “Validation Workshop on Capacity Gaps for Implementing Holistic Empowerment for Livelihood Programme (HELP)” noted that 90 percent of the women who benefitted from the programme have abided the conditions by returning three goats each to the government as interest on the goats earlier distributed to them.

“For you to know how serious we take agriculture in Jigawa, we discuss it every Monday at council meeting.

The governor said because it cannot compete with its bigger neighbour in terms of industrialisation, it had resorted to its area of comparative advantage.

He disclosed that Dangote rice farming has a robust out-grower scheme covering a piloted area of 8’000 hectares, which he said involved 5,000 farmers, launched in Hago village of Kafin-Hausa local government area of the State.

“But we are not relying on oil revenue because oil Well will soon be history if it runs dry, and for us to survive as a State, we have to work on competitiveness.

“We have to develop our people, our business, develop our agriculture, and this will enable us to keep the State abreast if the oil Well dry up. So agriculture is our life line.

“We have trained over 145,000 youths across the State on rice planting implement, to plant and transplant. We also trained women on rice parboiling. So we have developed alot of jobs on rice value chains. We doing same in Tomatoes, groundnut sectors. etc.

“Our being here is to discuss agriculture because it is a duty we must do for our people” he said.

The workshop was organised by the Arewa Research Development Project in collaboration with Forum for Agricultural Research in Africa
Labels: export Kuwait News Nigeria