Nigerian Prositutes Threatens The Nigerian Police ; Here's What They Said

Sex workers in Anambra State have threatened to starve policemen who patronise them over alleged harassment and arrest of their colleagues in major cities of the state. 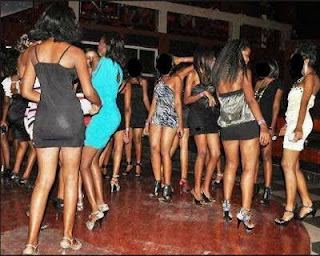 One of the sex workers, simply identified as Kamsi, who claimed to be a leader of the group in Umunze in the Orumba South Local Government Area of the state, told newsmen on Friday that her members in the state had decided to starve policemen.

Kamsi, a leader of the group of prostitutes, said they would commence the decision as from Monday next week.

She said, “These policemen constitute over 50 per cent of our customers, yet they come here at the garden to harass and intimidate us on daily basis.

“About two days ago, no fewer than 10 of our members here were arrested and taken to SARS office. They were maltreated and so dehumanised before they were granted bail and asked to pay through their noses before they regained freedom.

“This happens on daily basis here in Umunze, Onitsha, Awka, Nnewi, Ekwulobia, everywhere. So, we have decided that none of our members would ‘serve’ any policeman here in Umunze and the entire state.”

“Brother, let me tell you, we get information here. All big men that come here, we know them up to their family level.”


It was gathered that about a week ago, the Anambra Police Command raided brothels in various cities in the state and arrested no fewer than 120 persons.

The source further said that on Sunday, the police raided Happiness Hotel in Amanwayi, Amawbia at about noon, arresting about six women alleged to be prostitutes.

The source further alleged that the police also raided Dot4 Hotel, Mgbakwu and Bolin Hotel Nise, as well as another hotel in Ogidi, in the Idemili North Council Area, where about 60 persons were arrested.

Other areas raided, it was gathered, were Amansea, Umunze, Onitsha and Ihiala.

Kamsi said, “The suspects were raided and bailed with N10,000 each. The police have used such raids for making money.”
Labels: News state of nation