Senate President Bukola Saraki said senators seeking leadership change in the Senate must garner two-thirds majority (73 senators) to succeed. He vowed to resist any ‘illegal’ move to remove him until the required number of senators declared lack of his leadership. 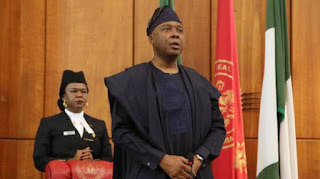 Addressing a press conference in Abuja yesterday, Saraki said the siege on the National Assembly on Tuesday by security operatives was orchestrated by forces that wanted to bring the federal legislature down.

Saraki, who was in company of Speaker Yakubu Dogara, said, “The siege was also an act of cowardice by those seeking to carry out an illegal impeachment of the leadership of the Senate in flagrant disregard of the law. People who seek control at all costs, by whatever means, never minding the injury to democratic norms.

“We have to say that this is not about us - Abubakar Bukola Saraki or Yakubu Dogara as an individual. It is not about Ike Ekweremadu, nor is it about Yusuf Lasun. We are speaking for my colleagues when I say that this is about the soul of Nigeria, what we represent as a country, and our standing in the comity of nations.

“This is a country where so much is expected of us, so many rungs of the ladder that we are supposed to have ascended as a nation. Instead we are wallowing in impunity and illegal show of force, all of which retard our progress.”

Saraki recalled that about two years ago, he had raised an alarm that there was a government within the government of President Muhammadu Buhari, and insisted that the incident of Tuesday was a clear manifestation of same.

While thanking Acting President Yemi Osinbajo for taking a decisive action against the siege by sacking the DSS DG, Lawal Daura, Saraki said a thorough investigation must be conducted into the matter.
Labels: Nass News politics