on August 28, 2018
Detectives attached to Ijanikin Police Station of the Lagos State Command have arrested a ‘mentally deranged’ couple in possession of various human parts and who resides under a bridge at Cele NICA bus stop, Ojo on the Mile 2 - Badagary expressway. 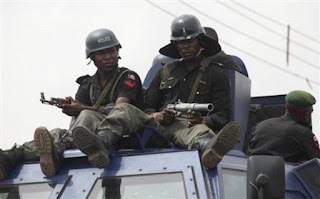 The incident caused panic as residents besieged the place to catch a glimpse of the couple whom they claimed were pretending to be mad.

The residents said that the couple’s pretence was to shield people from knowing that they actually deal on human parts.

One of the residents, Shade Oluwakemi, said that it was the lady who was arrested first. She said it took a combined team of the police and some residents hours before they could dragged the man, dressed in dirty cloths, out from under the bridge.

She said that if not for police presence, residents were prepared to set the couple on fire.

The woman with an undisclosed identity, according to residents, had been living on the bridge for several months.

However, residents who suspected her moves, monitored her movement until the starling discovery was made on Monday.

Another resident, Arewa Sunday disclosed that three human heads and different human parts were found in the suspect's possession.

The witness said that the lady allegedly threw away a telephone she was with into the bush on sighting officials of the Lagos Neighbourhood Watch Corps who were contacted.

Another resident, a trader, who identified herself as Mrs Winfred Orji, explained that ''I was going to the market when I stumbled on the crowd. I had to alight from the commercial bus to know what was going on. To my shock, I saw different human parts: both fresh and dried.

"Sometimes, smoke would be billowing from where she stays on top of the bridge. We concluded that she was cooking, unknown to us that she was roasting human parts.

A man's corpse was also found there, with his wrist watch still working. Clothes suspected to be those of her victims were also found with her. She usually went to Vespa market to beg the traders.

Another eyewitness, Abimbola Funmi, said that residents’ curiosities were aroused by some posh cars that usually parked close to where she stays on the bridge.

Funmi said: “A few days ago man parked his jeep there and was seen with her in broad daylight. What would a right thinking person be doing with a mad woman?”

When contacted, spokesman for the Lagos State Police Command, CSP Chike Oti, said '' at about 10am this morning, we received a distress call from a resident at a community in Olorunsogo that a mad woman who stays at the bridge was carrying a nylon and on close inspection they found a human skull inside. While they were dragging with the mad woman they saw officials of neighborhood watch who they invited to the scene.

The officials rescued the mad woman from the angry mob who wanted to lynch her and took her to their zonal office at Iba. The police went there and the suspect was transferred to State Investigation and Intelligence Department (SCIID) Yaba for further investigation.”
crime News police