Saraki Reveals Why He Met With Obasanjo On Monday

on August 13, 2018
Senate President, Bukola Saraki has disclosed why he met with former President Olusegun Obasanjo behind closed doors. 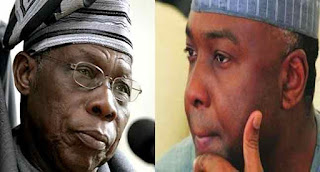 Saraki, speaking to newsmen after the meeting on Monday evening, said he was with Obasanjo to make up for his absence during the formal inauguration of the Presidential library held last year.

He said: ”You know I missed the official opening of the library and that is why I have decided to come and see the place and honestly it is beautiful we are very proud of what he has done here”.


When newsmen further questioned him on the crisis in the National Assembly and when the lawmakers will reconvene, Saraki kept mute and hurriedly entered his vehicle so as to avoid further questions .

The meeting between both leaders held at the former President’s pent house, at the Olusegun Obasanjo Presidential Library, Abeokuta.
News Obasanjo politics saraki