on August 28, 2018
Tottenham manager, Mauricio Pochdttino has reacted to his side 3-0 win over Manchester United manager on Monday. 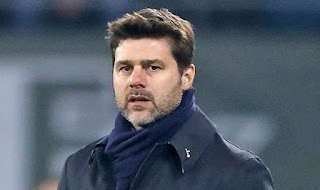 Jose Mourinho’s side suffered a humiliating 3-0 defeat in front of their home fans.

The result pegged Tottenham on the same point with Chelsea, Liverpool and Watford on top of the Premier League table.


United were beaten 3-0 by Tottenham, thanks to three second-half goals from Harry Kane and Lucas Moura (twice)

Reacting, the Argentine gaffer was quoted by Tottenham’s official Twitter handle as saying, “At the end of the day it is only three points but after four years coming here and not scoring one goal it is a massive victory.

“We need to keep pushing to be consistent across the whole season.”
EPL News Sport