on August 05, 2018
The deputy governor of Kano State, Professor Hafiz Abubakar, has resigned from his position as deputy governor over alleged disrespe"ct and injustice meted on him by Governor Abdullahi Umar Ganduje. 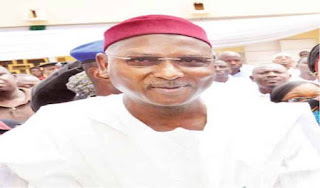 In the letter, the former deputy governor said the decision was taken due to irreconcilable differences on matters relating to governance and government operations.

He added that his advice to the governor had been reciprocated with persecution and injustices meted on him, and that he endured “immeasurable and unjustifiable humiliation” for over two and a half years on issues of governance and the desire to keep government on track.

The letter read in part: “Your Excellency would recall several instances I had to draw your attention to the need to understand and approach the differences in order to avoid drifting into the kind of unnecessary crisis we are facing today, but to no avail.

“Under the circumstances, and given the deteriorating state of affairs and your continued disrespect for the office of deputy governor and your expression of injustices on my person, I regret to say that I have no option than to succumb to my inner calling with hope that this decision is in accordance with guidance and wishes of Allah (SWT) for me and the good people of Kano State.”

Last week, Professor Abubakar had petitioned the police over alleged threat to his life, a development that compelled the police to beef up security around him.

It would be recalled that lawmakers in Kano State House of Assembly had on Monday, July 30, 2018, attempted to impeach the deputy governor.

Professor Abubakar, a loyalist of Senator Rabi’u Musa Kwankwaso, had been at loggerheads with Governor Ganduje.

Sources close to the former deputy governor told Daily Trust’s correspondent that Prof. Abubakar would soon join Kwankwaso in the PDP with a view to contesting the governorship seat in 2019.