In his first remarks on the vast California wildfires that have killed at least seven people and forced thousands to flee, President Trump blamed the blazes on the state’s environmental policies and inaccurately claimed that water that could be used to fight the fires was “foolishly being diverted into the Pacific Ocean.” 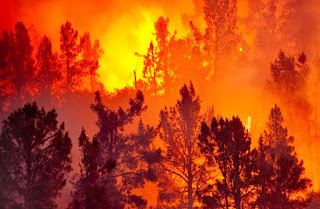 State officials and firefighting experts dismissed the president’s comments, which he posted on Twitter. “We have plenty of water to fight these wildfires, but let’s be clear: It’s our changing climate that is leading to more severe and destructive fires,” said Daniel Berlant, assistant deputy director of Cal Fire, the state’s fire agency.

He and others said that Mr. Trump appeared to be referring to a perennial and unrelated water dispute in California between farmers and environmentalists. Farmers have long argued for more water to be allocated to irrigating crops, while environmentalists counter that the state’s rivers would suffer and fish stocks would die.

The president first addressed the fires late Sunday, writing on Twitter, “California wildfires are being magnified & made so much worse by the bad environmental laws which aren’t allowing massive amount of readily available water to be properly utilized.” He also referred to a debate in forest management about the effectiveness of removing trees and vegetation as a fire control method.


On Monday, Mr. Trump expanded on his comments in another tweet, for a second time referring to water being diverted into the ocean.

The remarks came hours after the White House declared the wildfires a “major disaster” and ordered that federal funding be made available to help recovery efforts.


Is there a water shortage?

California does not lack water to fight the Carr Fire and others burning across the state, officials said.

Mr. Berlant of Cal Fire declined to speculate on the meaning of Mr. Trump’s statement that water was not being “properly utilized.”

Asked about that line and the president’s claim that water was being diverted into the Pacific, a spokesman for Gov. Jerry Brown, Evan Westrup, said in an email, “Your guess is as good as mine.”
The White House did not respond to requests for clarification on Mr. Trump’s statement.

William Stewart, a forestry specialist at the University of California, Berkeley, said he believed Mr. Trump was referring to the battle over allocating water to irrigation versus providing river habitat for fish.

That debate has no bearing on the availability of water for firefighting. Helicopters lower buckets into lakes and ponds to collect water that is then used to douse wildfires, and there is no shortage of water to do so, Cal Fire officials said.

California water regulators are preparing to negotiate how much water from the Sacramento-San Joaquin River Delta should flow to California’s farms and how much should flow down the river and to the ocean to ensure fish have enough fresh water to spawn and hatch.

The issue has long pitted environmentalists against the state’s farming communities.
During the 2016 presidential campaign, Mr. Trump took on the farmers’ grievances in language similar to his tweets this week.

“You have a water problem that is so insane, it is so ridiculous, where they’re taking the water and shoving it out to sea,” he said during a May 2016 campaign rally in Fresno. “They have farms up here, and they don’t get water.”

Recently, California Republicans encouraged the Trump administration to weigh in on the issue, inviting Interior Secretary Ryan Zinke to the Central Valley to discuss water rights in the state’s agricultural heartland.


“It’s a pretty big story, but it’s got nothing to do with the fires,” Mr. Stewart said.