"We Will Amend The Constitution To Make Buhari Life President" - Fed. Lawmaker

on August 10, 2018
The candidate of the All Progressives Congress in Saturday’s Bauchi South Senatorial District bye-election, Lawal-Yahaya  Gumau, says if elected into the Senate, he will work towards the amendment of the Constitution to make President Muhammadu Buhari president for life. 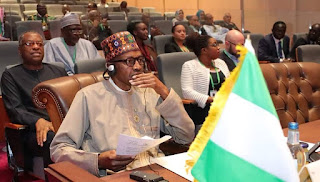 Gumau, who is currently the member representing Toro Federal Constituency in the House of Representatives and in his eighth year, said his only mandate for aspiring to go to the Senate is to protect Buhari’s interest.

He spoke at the closing of his campaign in Bauchi on Thursday.

He said, “I, Lawal-Yahaya Gumau, want you to know that the mandate that will be given to me on Saturday is to go and protect Buhari’s interest in the Senate. This is the only mandate that I will be going to the Senate with, having fulfilled every other mandate to the best of my ability while in the House of Representatives for eight years.

“Obasanjo tried all his best for the constitution to be amended to allow him go for a third term, but God didn’t approve of it because of its lack of sincerity. What is now needed in Nigeria is to protect Buhari’s interest and that is what we will do.”

Also speaking, the Chairman of the Nigeria Governors’ Forum and Governor of Zamfara State, Abdul’aziz Yari, who led three other governors to the campaign, said they were in the state on the mandate of the Acting President, Prof. Yemi Osinbajo, noting that it would be shameful for a candidate endorsed by Buhari to lose the election.

Apart from the host governor, Mohammed Abubabakar, the governors in the delegation were those of Plateau, Simon Lalong; Kebbi, Atiku Bagudu; and Jigawa, Badaru Abubabakar.


Yari said, “Our message is simple; the acting President is seriously worried about what is going on in Bauchi State and he told us to tell you that with all the love being shown to Bauchi State by the President, it will be a shameful and disgraceful thing for us in the north for President Buhari to raise the hand of someone and the person loses that election.”