The building housing a radio station and music studios belonging to a musician, Yinka Ayefele, is on the verge of being demolished by the Oyo State Government for contravening physical planning laws of the state. 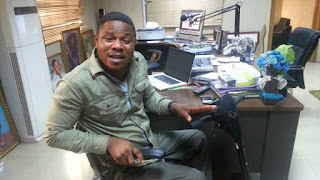 A demolition notice with reference number TF20181308/002 pasted on the wall of the building on the Lagos bypass, after Challenge bus stop in Ibadan by a task force officer from the state governor’s office, said that the structure should be removed in three days and that failure to do so would warrant government action to remove the structure.

As contained in the notice, the grace granted by the government expired on Wednesday so the order could be carried out on Thursday (today).

The notice, which was addressed to the owner, Ayefele, read, “Having failed to comply with the earlier stop work/quit/contravention notice(s) served on your development or as your structure is found to be structurally defective/poses danger or constitutes a nuisance to the occupier or the general public, you are hereby ordered to vacate the site and remove the structure thereon within three days, failure of which the government shall effect the removal and commence legal action against you in accordance with Section 43 of the law.”


Our correspondent gathered that the notice was the second sent to the owner of the radio station, Fresh FM, in 10 years. The building, which has four studios for radio broadcasting and music production, is said to worth around N800m. It is also understood that the station has a staff strength of 150.

A news director at the station, Samson Akindele, wrote on his Facebook wall that in 2012, the building was marked for demolition but was spared when Governor Abiola Ajimobi intervened.

Some sympathisers of the station and Ayefele said the building was targeted because of some of the programmes aired by the station,  which were considered anti-government.

“Our dear governor even visited our studio about two years ago and appreciated the fact that he was not led into demolishing the building, paying glowing tributes to the aesthetics of the studios and the richness of our programming, some of the reasons he accepted our invitation to appear live on the special interview programme.


“He also clearly stated on that show that words had reached him that he should not allow the building to stand because Dr Yinka Ayefele was not a friend of his administration but he told them that someone who is not a friend today could (be) one tomorrow.

Between then and now, what has changed? No new road being constructed or a road expansion being executed. But the relationship between Fresh FM and the state government has been anything but cordial, even as we have, on several occasions, acknowledged the giant strides of the administration in security and infrastructural developments,” he said.

Reacting to the demolition notice, the state government, through the state Commissioner for Information and Culture, Toye Arulogun, said Ayefele’s building was only one of many others served.