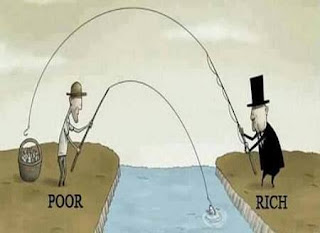 1. The rich believe in the law of income:

The rich believe they’ll receive their income based on value they add, while the poor believe they receive input based on the time they put into an activity.


2. The rich are voracious readers:


3. The rich focus on opportunities, not obstacles:

The rich see the good that can be derived from confronting the problem at hand, not the problem itself.

You are the average of the 5 people you associate with.


5. The rich are willing to promote themselves and their values:

Being average is a prerequisite to financial mediocrity. The rich master one thing and they make a whole lot of money from that one thing.


6. The rich go bigger than their problems:

They thrive on new challenges. They derive joy in providing solution to problems.

Economists came up with the term ‘opportunity cost.’ This means that if you choose one thing, you’re ultimately forgetting something else, i.e., if I have $5 and I go for an Ice-cream, that means I’ll be doing without the chewing gum I’d initially wanted. That’s how poor people think. Rich people, however, invest the $5 dollars so they can have both the Ice-cream and the chewing gum together.


8. The rich focus on net worth not working income:

Poor people focus on hourly pay but the rich know that’s not as important as someone’s net worth...


9. The rich are dollar smart:

There’s a saying that goes like this: ‘Penny smart, dollar stupid.’ That means you handle small money well, but flop with big money. Poor people are like that.


10. The rich network and volunteer regularly: