"Everything Is Not Okay In Nigeria" - Sultan Of Sokoto Decries

on September 07, 2018
The Sultan of Sokoto, Muhammad Sa’ad Abubakar, yesterday urged religious leaders to unite and preach against violence before, during and after the 2019 elections, just as he said Nigerians should stop deceiving themselves over the country’s problems. 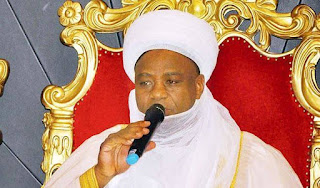 He also advised politicians to stop fighting because of defections.

“Politics is a choice, like religion. Therefore, let’s not fight each other because of defection,” he said when he received the Catholic Bishops of Nigeria in his palace in Sokoto yesterday.

“There is no fight between Christianity and Islam, but maybe disagreement between Muslims and Christians. But we must try and fish out extremists in our midst.

Though, you cannot completely fish out bad eggs from the society, we should continue doing our part to ensure a peaceful country,” he said.

The sultan added: “We have our problems and challenges. But we should collectively try and overcome them. As leaders, we must try and work for peace. There is no problem in this world that defies solution unless we are not honest. If not, we will overcome the problems.”

“We must also educate our followers that despite the challenges, we belong to one God Almighty but choose to worship God in different ways.”

On 2019 general election, he implored politicians to stop using children of the poor to spread violence.
He also spoke against killing of innocent people in the name of religion.

“People have wrong notions of Jihad. You cannot kill people pretending you are fighting for God. You are simply deceiving yourself. Jihad does not entail that. God did not create you to fight for Him,” he said.

Earlier, the National President of Catholic Bishops of Nigeria, Archbishop Augustine Akubeze, lauded the sultan for his roles on interfaith peace and peaceful coexistence in the country.

The Catholic Archbishop of Abuja, Cardinal Onaiyekan, noted the need for peace among religious leaders and for them to work towards ensuring peaceful coexistence among the citizens.

In his remarks, the Catholic Bishop of the Sokoto Diocese, Rev. Matthew Hassan Kukah, acknowledged the sultan’s cordiality to all, irrespective of religion and other leanings.