"I Don’t Have N20m In My Account, Except I Sell My House – Kaduna State Gov.

on September 11, 2018
The governor of Kaduna state, Nasir el-Rufai, Monday said that he does not have N20m to buy an expression of interest and nomination forms for himself. 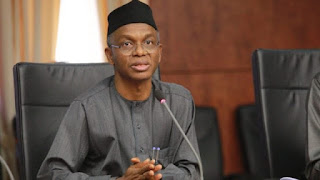 Speaking in the states government house, El-rufai commended the Association of Cattle Sellers, Independent Petroleum Marketers Association of Nigeria (IPMAN), NATO, and Sheikh Gumi Market Association who bought the forms for him.

Quoting El-rufai as cited by thecable, “When the party fixed the money for the form, I could remember that during the meeting, the President was the first person to rise his hands and said he does not have N50m.

”Infact, we the governors started discussing on how we will raise the money for Mr President.

“We said each governor will contribute N2 million each and we travelled to China and it was in China I told the president that some group have purchased the form for you. So who will buy my own for me?

“I don’t have N20 million also to buy my form. The money I have in the bank is not close to that amount. I have only one account in GT . Except I sell my house will I be able to raise that amount.”